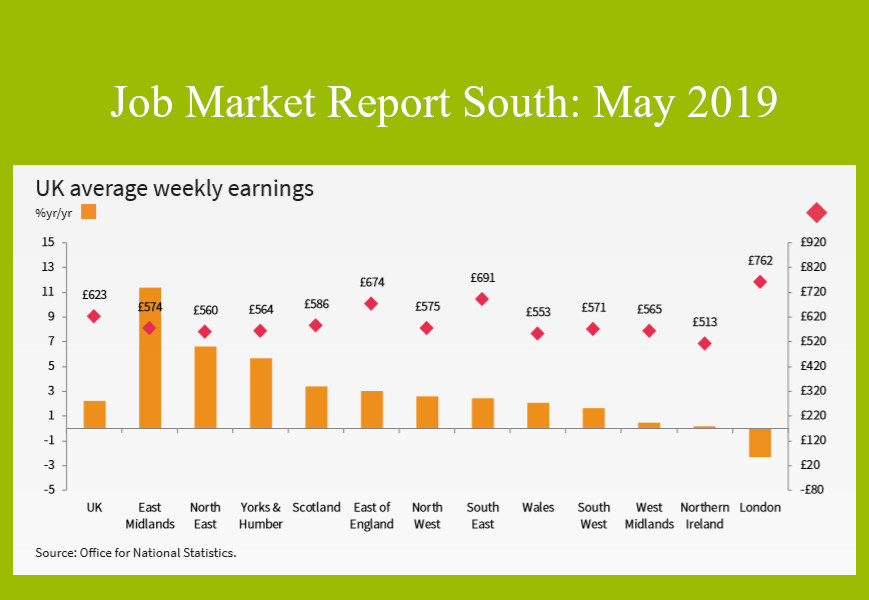 Every month, Dovetail Recruitment summarise the key points from the KPMG and REC UK Report on Jobs: South of England. Here are the vital statistics HR Manager’s need on the state of the Bournemouth Employment Market.
Please see below for May 2019 figures, including the UK’s average weekly salaries, candidate placements and skill shortages. It’s a must HR read.

“As political uncertainty only increases it’s not that surprising to see that permanent placements are continuing to decline – last month at the quickest rate in a decade. It’s down to businesses both delaying hiring decisions until there is more clarity, and candidates delaying a job move during this rocky period.”
“The upside for the South is that the increased uncertainty from the contest for a new Prime Minister has correlated with the region’s quickest increase in temporary billings this year. This actually bucks the UK trend, where growth in temp billings weakened to a six-year low. This increase in the use of temporary staff could be linked to a willingness for businesses in the region to not stall as uncertainty increases.”
“Businesses would be wise to be bold and snap up any good temporary staff for the long term – once the hiatus is over there will be a rush on the job market so it’s a smart way of staying ahead of competitors.”

Neil Carberry, Recruitment & Employment Confederation chief executive, said:
“The jobs market is still creating opportunities for those looking for work. With vacancies rising and starting salaries going up sharply, it is worth people talking to recruiters about that next step in their career. “Overall, though, the survey again shows what uncertainty does to hiring plans, with permanent placements dropping again.”

Permanent placements across the South of England fell for the third successive month in May. Notably, the rate of reduction was the quickest recorded since July 2009 and solid overall. Recruiters widely linked the decline to delayed hiring decisions, reduced candidate availability and softer demand conditions. Permanent staff appointments also fell at the national level in May, albeit at a modest rate.

Recruitment agencies in the South of England signalled a sharp and accelerated rise in billings received from the employment of temporary workers during May. Furthermore, the rate of growth was the quickest seen in the year to date. Relatively firm demand for short-term staff was linked by panellists to the latest upturn. In contrast, temporary billings increased at the weakest rate for 73 months across the UK as a whole.

The South of England saw relatively subdued increases in both permanent and temporary staff vacancies in May. Though solid and on par with the UK average, growth of demand for permanent staff in the region expanded at the slowest rate since February 2012. At the same time, temporary vacancies in the South rose at the joint-weakest pace since May 2013. Growth of temp staff demand in the region also lagged the national trend for the fifth month in a row.

The supply of permanent candidates in the South of England contracted for the seventy-first month in a row during May. Despite easing to the least marked since February, the pace of reduction remained historically sharp. Panel members often stated that uncertainty around the outlook had made people reluctant to seek out new roles. A sharp drop in permanent staff supply was also seen at the UK level, albeit one that was slightly softer than that recorded for the South.

The number of candidates available for temporary work in the South of England fell further in May, thereby stretching the current sequence of deterioration to 69 months. Although the rate of reduction softened since April and was slower than the UK-wide trend, it remained sharp in the context of the series history. Recruitment agencies generally attributed the fall to greater economic uncertainty and tight labour market conditions.

Salaries awarded to permanent starters in the South of England rose further during May. Despite easing since April, the rate of pay growth remained sharper than the long-run series average and above the national trend. Higher salaries were widely linked to greater competition for workers amid increasingly tight labour market conditions.

Recruitment consultants based in the South of England signalled a sustained rise in temp wages in May. According to panellists, low candidate availability had driven up pay in the latest survey period. Notably, the rate of inflation accelerated for the third month running to the sharpest seen since last November. The pace of pay growth in the region also outstripped the national average for the third time in as many months.

Permanent staff placements across the UK fell for the third month in a row during May. The rate of decline accelerated slightly from April and was modest overall. The latest fall was driven by contractions in three of the four monitored English regions, led by the Midlands. The North of England was the only area to record an expansion in permanent staff appointments, registering a marked increase overall. At the same time, temporary billings continued to rise across the UK, extending the current sequence of expansion to just over six years. That said, the rate of growth eased to the slowest seen over this period and was marginal overall. At the regional level, increases in the South of England and London helped to offset declines in the North of England and the Midlands.

As has been the case in each month for just over six years, UK permanent labour supply deteriorated in May. The rate of reduction was the quickest for four months, driven by sharper contractions in London and the Midlands. Nonetheless, there were also marked declines in permanent staff availability in both the North and South of England. Temporary staff availability also continued to fall midway through the second quarter. Moreover, the rate of decrease accelerated to the quickest since February and was historically marked. Recruiters noted sharp declines in each of the four monitored English regions, with the Midlands and London recording the steepest rates of contraction.

Permanent starting salaries across the UK continued to increase in May, extending the current sequence of growth to just over seven years. The rate of inflation remained historically sharp, despite easing to the softest since April 2017. At the regional level, the steepest rise in permanent starting pay was registered in the North of England, while the weakest was seen in London. Meanwhile, remuneration for temporary staff across the UK rose at a faster pace than in April. The rate of inflation ticked up to the quickest for six months and was sharp overall. All four monitored English regions recorded steeper increases in temp pay, bar the North of England.

Related Dovetail Recruitment articles:
Working from home
Career Tips: How to ask for a pay rise
Thinking of a career change?

Thanks as always to IHS Markit + KPMG for providing the data.