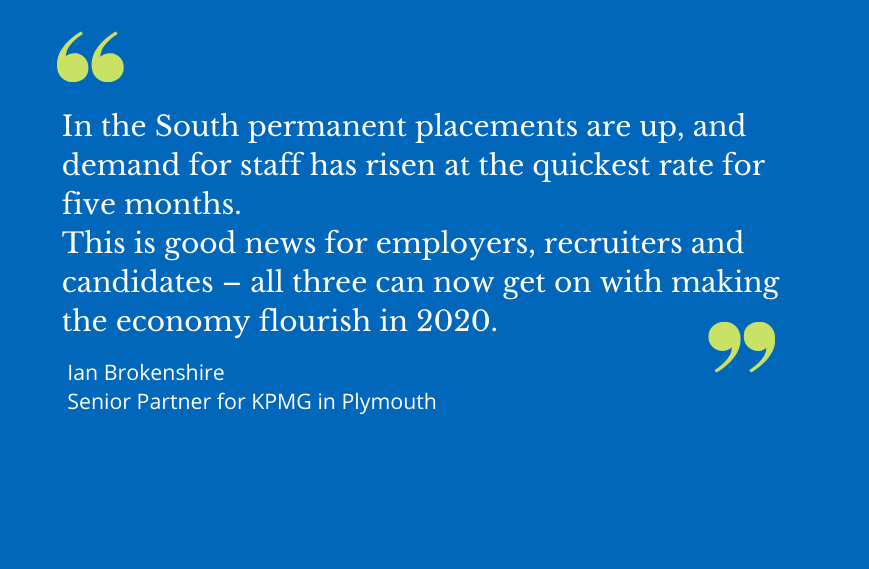 Every month we receive the latest figures on the employment market in the South and the UK, kindly provided by IHS Markit, KPMG & REC who gather the key statistics from recruitment consultancies in the area.

Permanent placements increase for the first time in nearly a year

“In December it was clear that the South had some catching up to do, and finally it seems the region’s businesses have got the message. With geopolitical uncertainty easing significantly towards the end of last year, we are seeing some movement in the permanent jobs market with vacancies and placements rising at last. This is great news for job hunters.

“Temporary candidates and billings meanwhile fell during January, with the former declining at the fastest pace for six months. However, I could surmise that this is partly to do with renewed confidence among businesses in some sectors to recruit for permanent candidates.”

“It’s good to see that businesses have grown in confidence over the past two months and taken the opportunity to restart hiring. In the South permanent placements are up, and demand for staff has risen at the quickest rate for five months. This is good news for employers, recruiters and candidates – all three can now get on with making the economy flourish in 2020.

“But the upcoming IR35 reforms are having a negative impact on the availability and placement of temporary workers. It is vital that people pay the right amount of tax and that the system is fair, but for both of those things to happen we think the government needs to pause and think again on how IR35 changes. The temporary labour market is being stifled, and that’s not good for employers or our economy.”

The number of people placed into permanent roles in the South of England rose for the first time in 11 months in January. Though modest, the rate of expansion was the strongest recorded since January 2019. Recruiters that registered an increase indicated that this was due to greater confidence among clients following the general election and the filling of outstanding vacancies.  The upturn in permanent placements was broadly in line with the trend seen across the UK as a whole.

Temp billings fall at the start of 2020

Adjusted for seasonal influences, the Temporary Billings Index slipped back below the neutral 50.0 level in January to signal a renewed fall in temp billings. Short-term staff billings have now declined in three of the past four months, though the latest reduction was only slight.

Anecdotal evidence indicated that relatively subdued demand for temp workers had weighed on billings in January. At the national level, temp billings also fell, albeit fractionally.

Permanent staff vacancies expanded at a quicker pace in the South of England during January. Though moderate, the latest upturn was the quickest recorded for five months. However, growth of
demand for permanent staff rose at a sharper pace at the national level.

Recruiters in the South of England signalled a softer rise in temp vacancies at the start of the year. Growth eased to a mild pace that was the slowest for three months. The upturn also lagged that seen across the UK as a whole.

The number of candidates available for permanent jobs in the South of England continued to decline during January. The rate of deterioration was the least marked for four months, but remained sharp overall and outpaced the national average. Reports from panel
members indicated that uncertainty over the outlook had led people to become more reluctant to seek new roles.

The seasonally adjusted Temporary Staff Availability Index remained below the neutral 50.0 threshold to signal a sustained fall in short-term labour supply in the South of England. The rate of contraction quickened slightly from December and was the steepest for six months. The fall was also sharper than that seen across the UK as a whole.
Lower temporary candidate supply was often attributed to impending IR35 changes and fewer people looking for short-term roles.

Average starting salaries for permanent workers in the South of England continued to rise at the start of 2020. According to panel members, low candidate availability continued to place upward pressure on starting pay. Though solid overall, the rate of inflation was the slowest recorded for three-and-a-half years. Salary growth also softened at the national level, and was similar to that seen in the South of England.

Temp pay growth eases at start of the year

Recruiters based in the South of England registered a softer rise in temp wages in January. Notably, the rate of pay growth was among the slowest recorded since late-2016, albeit solid overall. Higher average hourly pay rates were largely linked to a low unemployment rate and
greater competition for workers. Temp wage growth also eased across the UK as a whole at the start of 2020.

Permanent placements increased across the UK as a whole during January, extending the current sequence of growth to two months. The pace of expansion quickened from December and was solid overall, albeit subdued in the context of the series historical data. Driving the latest uptick were increases in both the North and the South of England, with the former recording the sharper rise. Meanwhile, the Midlands and London posted renewed reductions, with the rate of decline slightly quicker in London.

Concurrently, temp billings fell at the national level during January, ending an 80-month sequence of growth. The pace of reduction was only fractional, however. At the regional level, declines were recorded in both London and the South of England, with London noting the quicker reduction. Elsewhere increases were reported in the Midlands and the North of England.

January data highlighted a further reduction in the availability of permanent candidates across the UK, extending the current sequence of decline to over six-and-a-half years. Albeit still sharp, the rate of contraction was the softest since September last year. The latest reduction was driven by falls across all of the four monitored English regions, the sharpest of which was recorded in the South of England, followed by London.

Similar to the trend for permanent availability, the supply of temporary candidates fell further during January, as has been the case in each month since July 2013. Moreover, the pace of decline was the fastest for seven months and sharp overall.
Of the four monitored English regions, the Midlands recorded the sharpest fall in temp labour supply. London was the only region to record an increase.

Salaries for permanent new joiners continued to increase across the UK as a whole during January. Albeit still solid overall, the rate of salary inflation eased to the slowest since July 2016. All of the four monitored regions reported an uptick, the sharpest of which was in the Midlands.

January data highlighted a further increase in temp staff wages across the UK. That said, the rate of wage inflation eased from December and was among the lowest seen in the current 84-month sequence of increase. London recorded the quickest rise of the four monitored English regions, whilst the weakest uptick was seen in the North of England.

Make sure you follow us to keep up to date with news, jobs and career tips: