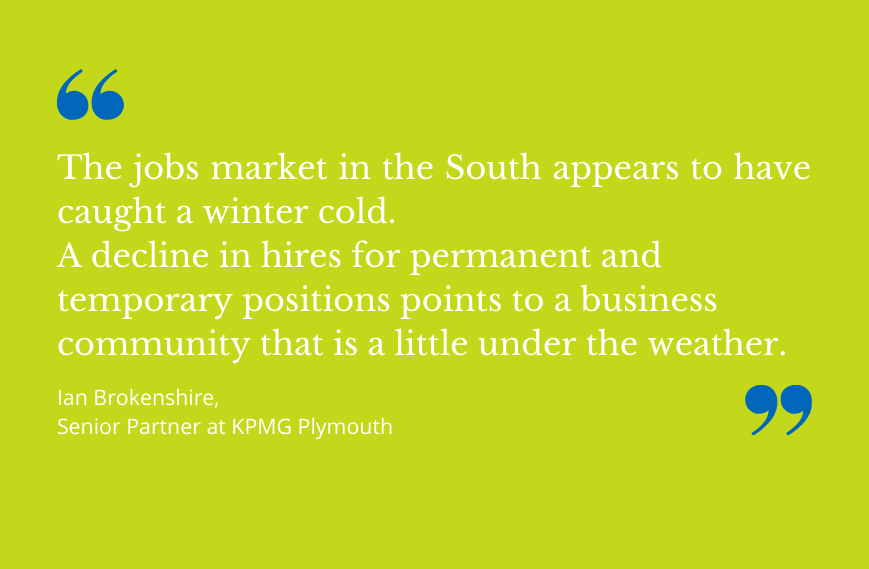 Every month we gather the key stats about employment in Dorset,  from the IHS Markit, KPMG & REC Job Market Report – the regular update from recruitment consultancies in the area.

Hiring activity in the South of England remains weak in November

“The jobs market in the South appears to have caught a winter cold. A decline in hires for permanent and temporary positions points to a business community that is a little under the weather. Political and economic clarity will be the perfect tonic for employers and address the lethargy that is holding back new roles being created and stopping job seekers from considering new opportunities.”

“Today’s figures show exactly why this election needs to focus on work. The jobs market is still strong, but uncertainty is taking its toll. In the South, permanent placements have now fallen for nine months in a row and vacancies growth is at its weakest for a decade. Any incoming government must move quickly to boost business confidence and implement policies that will help companies and individuals to make great work happen.”

“With that in mind, it was good to hear Sajid Javid say that a Conservative government would review the planned changes to IR35 if they win the general election, alongside similar commitments from Labour and the Liberal Democrats. Everyone should pay the right amount of tax – and that must mean thinking again and stopping 2020 implementation. Contractors and the self-employed are a vital part of the UK’s flexible labour market, and current implementation plans risk rewarding those who avoid tax whilst punishing hundreds of thousands of compliant contractors and agencies. It is essential that these tax changes are only brought in when it’s clear they can be implemented effectively, with proper regulation of umbrella companies and effective enforcement.”

The seasonally adjusted Permanent Placements Index signalled a ninth successive monthly drop in permanent staff appointments across the South of England in November. There were numerous reports that employers were holding off or cancelling hiring plans due to political and economic uncertainty. Furthermore, the rate of reduction quickened to the most marked for five months and was solid overall. Permanent placements meanwhile fell only modestly at the national level.

Billings received from the employment of temporary staff in the South of England fell for the second month running in November. Though modest, the rate of decline was the strongest seen since mid-2012. Uncertainty was also highlighted as a key factor dampening temp billings. Across the UK as a whole, temp billings rose at a marginal rate that was the softest for three months.

The growth of demand for staff remained relatively subdued across the South of England in November. Permanent vacancies increased at a marginal pace that was unchanged from October’s decade-low. Growth of demand for short-term workers meanwhile improved to a six-month high. That said, the upturns in both permanent and temporary vacancies remained weaker than those seen at the national level, and were subdued by historical standards.

The number of people available to fill permanent job roles in the South of England fell further in November. The rate of deterioration accelerated to the steepest since June, and remained much quicker than the series average. According to anecdotal evidence, uncertainty stemming from the upcoming election and Brexit had deterred many people from seeking out new roles. The reduction in permanent candidate numbers also outpaced the UK-wide average.

Adjusted for seasonal factors, the Temporary Staff Availability Index signalled a sustained drop in the supply of short-term staff in the South of England during November. Panel members linked the fall to a reluctance among candidates to change roles, concerns around upcoming IR35 changes and fewer EU workers. Though solid overall, the pace of deterioration was the least marked for three months and slower than the national average.

EMPLOYMENT IN DORSET: DEMAND FOR SKILLS

Starting salaries rise at slowest rate for over three years

Recruitment consultancies in the South of England signalled a further increase in salaries awarded to permanent new joiners in November. Though still sharp overall, the rate of growth was the least marked since August 2016. Higher starting salaries were widely associated with candidate shortages and efforts to attract skilled workers. A softer rate
of permanent pay growth was also seen at the UK level.

Latest data indicated that remuneration awarded to temporary staff in the South of England rose for the ninety-second month running in November. Anecdotal evidence suggested that candidate shortages had led clients to up their wage offers. Though solid, the rate of wage inflation was slower than that seen in October and weaker than the average seen over the current period of pay growth. Across the UK as a whole, temp pay growth eased to a three-year low.

Recruitment consultancies across the UK reported a ninth consecutive monthly fall in permanent staff appointments in
November. The rate of decline eased to the softest since July and was only mild, however. Driving the latest reduction were falls in two of the four monitored English regions, led by the South of England. Meanwhile, increases were seen in London and the North of England.

Temp billings across the UK continued to rise during the latest survey period, as has been the case in each month since May 2013. That said, the increase was the softest for three months and only marginal. At the regional level, growth was reported in the Midlands, the North of England and London, with the Midlands recording the quickest increase overall. The South of England noted a second successive monthly decline, albeit modest.

Permanent candidate availability continued to deteriorate across the UK in November, with the pace of decline
accelerating to the fastest for five months and remaining marked overall. The reduction was driven by falls across all of
the four monitored English regions, with the South of England posting the fastest rate of contraction. The North of England reported the softest deterioration, albeit one that was sharp nonetheless.

Similar to the trend for permanent availability, the supply of temporary candidates fell at the UK level in November, with the pace of decline accelerating from October to a solid rate overall. Of the four monitored English regions, the Midlands reported the steepest rate of reduction. Meanwhile, the North of England bucked the overall downward trend, and registered a modest increase in temporary candidate supply.

Permanent starting salaries across the UK rose in November, as has been the case in every month since May 2012. The latest increase was solid, albeit the slowest for almost three years. All of the four monitored English regions reported a rise in permanent starters’ pay, with the rate of salary inflation most marked in the North of England.

Meanwhile, November data highlighted a further increase in average hourly pay for temporary workers. The rate of wage inflation eased, however, and was the slowest for three years. The South of England recorded the strongest rate of pay growth of the four monitored English regions. The weakest increase was meanwhile seen in the North of England.

Follow us to keep up to date with news on HR, careers and everything related to employment in Dorset, as well as jobs + everything else related to your working world.