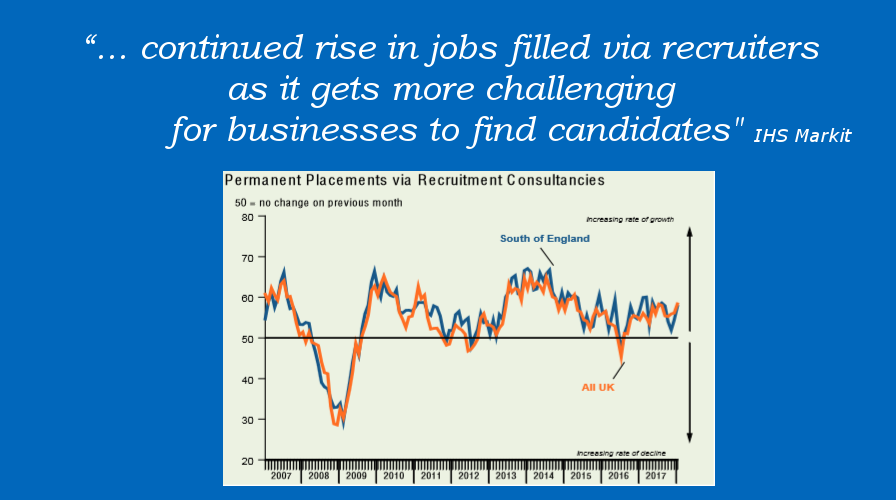 We’ve summarised Kevin Green’s ( REC Chief Executive) comments below which give a great overview of the current job market. In a nutshell, The report finds that companies are relying more heavily on agencies to support their recruitment needs as the candidate shortage continues…and:

“We are seeing a continued rise in jobs filled via recruiters as it gets more challenging for businesses to find candidates. The UK has almost full employment and the country is plagued by labour, skills and talent shortages.

So, it’s a good time to move jobs, especially as employers aren’t increasing wages for their existing workforce.

“It’s reassuring that demand for permanent staff remains strong despite the economic uncertainties. However, there is a slight slowdown in the growth of temporary placements across the UK. This could be an early sign that employers are hesitating.”

“The struggle to find appropriate candidates will get worse. We are therefore asking for a balanced and evidence-based immigration system. Businesses urgently need to invest in the upskilling of their workforce. The government can help by turning the Apprenticeship Levy into a broader training levy. It’s time they put the concerns of UK businesses at the top of their agenda.”

January data signalled a further increase in the number of people placed into permanent job roles by recruitment consultancies in the South of England. Notably, the rate of expansion picked up to a four-month record and was sharper than the long-run series trend. However, the rate of growth continued to lag behind that seen across the UK as a whole.

The current sequence of growth in salaries awarded to newly-placed permanent staff in the South of England was extended to 67 months in January. According to panellists, starting salaries were raised in order to attract applicants amid ongoing candidate shortages. Although the rate of inflation was unchanged from December’s six-month low, it remained sharp overall. That said, the pace of increase was softer than that seen across the UK as a whole.

Regional Comparison of the South vs Rest of the UK

We’ve extracted the key points from the report’s regional comparison it’s a mixed bag of good and bad for the South region in contrast to what’s going on in the rest of the UK.

Growth of permanent staff placements in the UK quickened to a six-month peak in January. The acceleration was underpinned by faster expansions in Scotland (two-month high), London (two-month high), the North (five-month high) and South of England (four-month high). Only the Midlands recorded a softer upturn (11-month low).

Candidate pools for permanent jobs shrunk across the five tracked UK regions in January, as has been the case for 55 months. The steepest deterioration was recorded in the South of England and the slowest, albeit still sharp, in the Midlands.

Permanent starter’s salary inflation accelerated in all regions bar the South of England, where the rate of increase matched the one seen at the end of 2017. The steepest rise was noted in the Midlands (two-year peak). Notably, the rate of inflation in the capital was the most marked since May 2015.