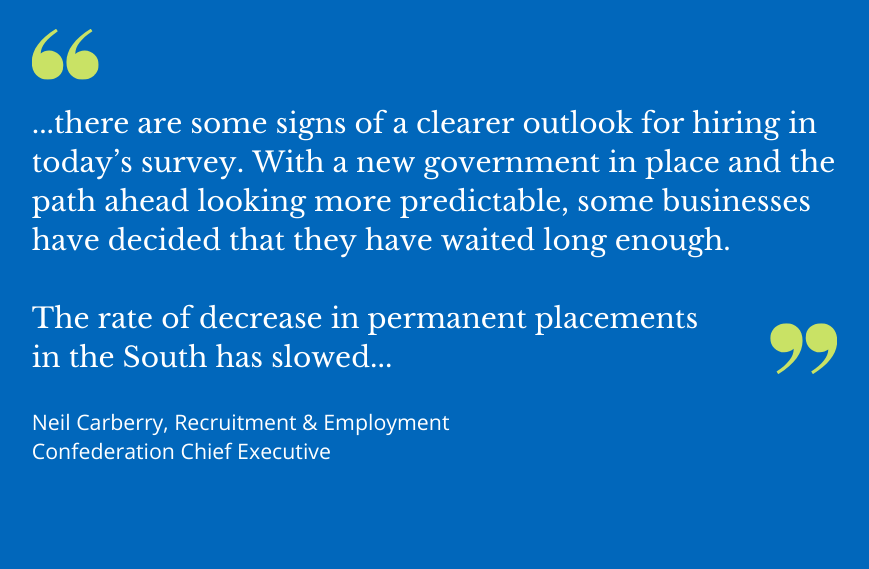 Every month we receive the latest figures on the employment market in the South and the UK, kindly provided by IHS Markit, KPMG & REC who gather the key statistics from recruitment consultancies in the area. Employment prospects did look up in December, with the new government bedding in to provide some reassurance to companies across the country,

“The South has presented a very different picture to the rest of the UK over the last month. Permanent and temp candidate supply fell at quicker rates than seen on average across the UK, and notably, the South was the only region to record a drop in both permanent placements and available permanent jobs.

“It seems that the political picture is becoming less uncertain, and it will be really interesting to see whether this gives a confidence boost to businesses in the region. If so, it will be reflected in hiring decisions at the end of this month. The South has some catching up to do.”

“After the uncertainty of 2019, there are some signs of a clearer outlook for hiring in today’s survey. With a new government in place and the path ahead looking more predictable, some businesses have decided that they have waited long enough. The rate of decrease in permanent placements in the South has slowed, and this should give encouragement to both recruiters and employers – let’s hope
this is a sign of positive things to come.

“Feedback from recruiters shows that the upcoming IR35 changes are affecting both placements and the availability of flexible workers. This is a delicate period for the jobs market, and is the worst time to push through sweeping changes to the way we tax contractors. It is right that government engages further with business on the changes, but they should also delay implementation until next year to allow time for a full, independent review and effective regulation of the umbrella sector.  As it stands, the government risks damaging ethical businesses and encouraging non-compliance.”

Recruitment consultancies in the South of England registered a tenth consecutive monthly fall in permanent placements at the end of 2019. That said, the rate of reduction was the weakest seen for three months and modest overall. Panellists often attributed the decline to fewer vacancies and uncertainty around the outlook. In contrast, permanent staff appointments increased across the UK as a whole in December, albeit at a relatively mild pace.

Latest data signalled the first increase in billings received from the employment of temp workers in the South of England for three months inn December. Some panel members indicated that the rise was supported by the commencement of previously delayed hiring decisions, as well as increased business requirements. That said, the rate of expansion was modest and slightly softer than the UK-wide trend.

Temp vacancies in the South rose only modestly at the end of the year, with the rate of expansion slower than the UK-wide trend.

Recruitment consultants are asked to report whether availability of permanent and temporary staff has changed on the previous month.

Uncertainty related to Brexit and the general election, as well as skill shortages, were cited as key factors weighing on permanent candidate supply in the South of England at the end of 2019. Although easing slightly since November, the rate of contraction remained notably quicker than the historical average. The decline also outpaced the UK-wide trend for the tenth month in a row.

Recruitment consultancies in the South of England reported a further fall in the supply of short term staff during December. Notably, the rate of reduction was the quickest for three months and sharp overall. Panel members often mentioned that a generally low unemployment rate and a reluctance to switch roles due to uncertainty had weighed on temporary candidate numbers. At the UK level, short-term staff supply also fell markedly at the end of the year.

The seasonally adjusted Permanent Salaries Index remained above the neutral 50.0 mark, to signal a further rise in starting pay for permanent joiners in the South of England during December. Anecdotal evidence suggested that candidate shortages had driven up pay offers at the end of 2019. Although sharper than that seen in November, the rate of inflation was notably softer than those seen at the start of the year. Starting salaries rose at a similarly sharp rate across the UK as a whole.

Temp wage inflation picks up at the end of 2019

Recruitment consultancies in the South of England recorded a sustained increase in hourly rates of pay awarded to short-term staff during December. Furthermore, the rate of inflation quickened from November and was slightly sharper than the UK-wide trend. Recruiters that recorded higher temp wages often attributed this to efforts to attract suitably skilled workers.

Permanent staff appointments across the UK increased for the first time in 12 months during December, although the uptick was only mild overall and subdued in the context of historical data. Driving the overall rise were increases in three of the four monitored English regions, the sharpest of which was recorded in the North of England. The South of England was the only region to report a decline in December.

Meanwhile, temporary billings rose across the UK in December, as has been the case in each month since May 2013. The expansion was the joint-fastest since April, although only modest overall. All four of the monitored English regions signalled an uptick in temp billings, with the Midlands recording the quickest rise, followed by London. The softest increase was reported in the South of England.

December survey data pointed to another decline in the availability of permanent staff across the UK, extending the current sequence of deterioration to over six-and-a-half years. The latest reduction was the softest for three months, but marked nonetheless, driven by falls across all four monitored English regions. The steepest contraction was seen in the South of England, whilst the North of England recorded the softest rate of decline.

In line with the trend for permanent staff, temp labour supply also fell during December, as has been the case in each month since July 2013. The rate of decline was the quickest for six months and sharp overall. At the regional level, the fastest deterioration was reported in the Midlands, followed by the South of England. In contrast to the overall trend in December, the North of England recorded an improvement in temp candidate availability, albeit one that was only mild.

December data highlighted a further increase in starting salaries for permanent staff across the UK, stretching the current sequence of inflation to over seven-and-a-half years. The rate of inflation accelerated from November and was sharp overall, with all four of the monitored English regions recording a rise. The North of England reported the quickest increase, whilst London noted the softest rate of pay growth.

Meanwhile, temp staff wages across the UK rose further during the latest survey period, with the pace of inflation quickening from November to a solid rate. Of the four monitored English regions, pay growth was most marked in the South of England and London, whilst the North of England recorded the softest rise.

Follow us to keep up to date with Recruitment + HR news, as well as our latest jobs, career tips + everything else related to your working world.