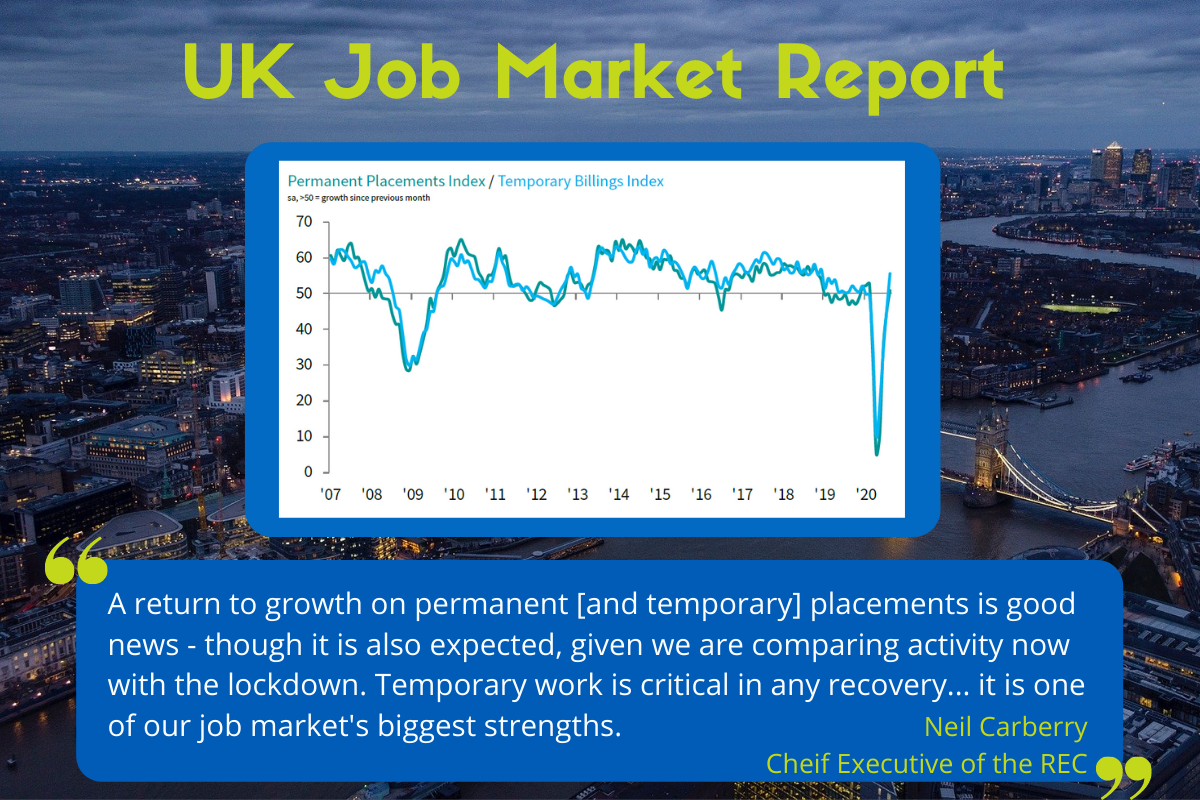 “It’s positive to see an uptick in hiring activity, particularly for temporary staff, which could mark a turning point with businesses appearing more willing and able to hire as more parts of the UK economy reopen.

“But with total candidate availability rising at a near-record pace, strong and sustained rises are needed to move the UK jobs market back to levels seen pre-COVID – and with concerns around a possible second wave of infections, the winding down of the furlough scheme and a Brexit deal outcome, there are still many challenges ahead.

“This paves the way for government to not only provide short-term support but also to offer jobseekers the means to retrain and upskill, helping the recovery in jobs and reviving the UK’s productivity growth.”

“A return to growth on permanent placements and temporary billings is good news – though it is also expected, given we are comparing activity now with the lockdown. Temporary work is critical in any recovery – businesses turn to temps to help them ramp up and meet demand while the future looks uncertain. At the same time, it enables

people to find work quickly. Past recessions show that temporary work bounces back more quickly – it is one of our jobs market’s biggest strengths and that’s really showing now.

“Slower growth in permanent staff appointments is concerning. It reflects the uncertainty businesses face about what will happen over coming months with the pandemic and Brexit. Government can take action to address this – by focussing on getting a trade deal in place and supporting businesses to keep people employed. A reduction to employers’ National Insurance Contributions, and greater flexibility on skills support would both help firms to maintain jobs and hire more people.”

Permanent placements increase for the first time in six months

Agencies have reported an increase in placements for the first time in six months and since the start of the lockdown following the easing of restrictions and re-opening of the economy. While the rise was only slight, it was a much welcome improvement to the recent months as recruitment freezes have been lifted. However, there were still reports that the demand was still lower than is normal for this time of year and while overall placements increased, this was strongest in the South, while the North of England and London reported a decline.

Agencies reported for the first time in seven months, the billings received for temporary workers increased. This growth was the sharpest seen since the end of 2018. This was directly related to the easing of lockdown, opening of the hospitality and tourism sectors and the return to more normal market conditions. Like permanent placements, the steepest rise was seen in the South and still declined in London.

Slight but further drop in overall demand for staff

In August, vacancy numbers still decreased showing a further reduction in demand for staff. However, the reduction was much weaker than at the peak of the pandemic and the months that followed. This was mainly noted for permanent vacancies while temporary staff demand stabilised and rose markedly in the private sector.

Looking at the last three month period as a whole, the ONS has reported that vacancies fell by -55.1% on an annual basis and the number of vacancies is very close to the record low.

The sharpest rise in permanent labour supply since December 2008 was reported once again.

Overall candidate availability again accelerated in August. It was the 2nd sharpest since records began almost 23 years ago. This was seen across both permanent and temporary candidates. This was the fourth month running of a steep increase. The main factor being cited was redundancies caused by the pandemic, and the drop in economic activity. Those on furlough are also seeking new roles for fears of being made redundant once the furlough scheme ends in October.

This sharp rise was seen across both permanent and temporary candidates and the steepest was seen in London.

Although starting salaries continued to decline in August in line with the candidate availability increasing, the rate of reduction was the slowest since the decline began. A more competitive market and budget cuts were cited as the main reason for the continued decrease. This slower decline was seen in both temporary and permanent billings. The most marked drop in salaries was seen in London and the softest was in the south.

Sources: Thanks as always to IHS Markit, KPMG and REC for the data provided for our UK Job Market Report for August.