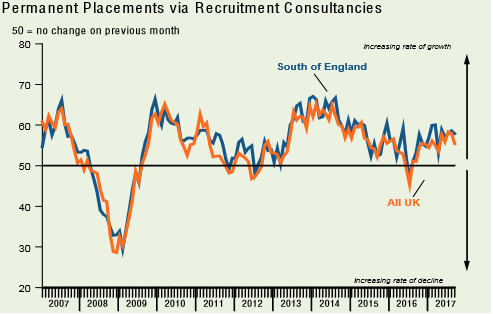 The stats are in for September! We’ve summarised the figures for you from IHS Markit’s latest Job Market Report.

Highlights in the South

There was a further sharp increase in the number of people placed into permanent jobs during September. This was despite the rate of expansion softening slightly since the previous month. Nonetheless, growth in permanent placements remained stronger than that seen at the national level.

The availability of permanent candidates in the South of England continued to fall sharply during September, despite the rate of deterioration easing slightly since August. The decline was also the steepest seen of all monitored UK regions, with around 43% of panellists in the South of England noting reduced permanent candidate numbers. Anecdotal evidence indicated that chemists, healthcare workers, project managers and welders were in short supply.

September data signalled a sustained increase in salaries awarded to permanent starters in the South of England. According to panellists, candidate shortages had prompted a number of firms to bump up their rates of pay. Notably, the rate of salary inflation accelerated to a 29-month record and was faster than the UK-wide average.

Permanent placements increased across the UK in September, thereby extending the current period of growth to 14 months. The rate of expansion was, however, the weakest recorded since April. An increase in permanent staff placements was evident in each region monitored by the survey except for London, where a decline was registered for the first time since October last year. A rise in temporary billings continued to be seen across the UK as a whole in September. As was the case with permanent placements, however, the rate of growth weakened from August. Weaker increases in temp billing were signalled for each of the monitored regions bar Scotland.

Permanent candidate supply continued to fall at the UK level in September. Furthermore, the rate of contraction accelerated to a four-month record and was marked overall. The decline was broad-based across each of the surveyed regions, led by the South of England. The availability of temporary staff also declined, thereby continuing a trend that has been evident since July 2013. The rate of reduction remained sharp, despite weakening from August. Weaker rates of deterioration were registered in all regions except for the North of England.

Permanent salaries in the UK increased in September thereby continuing a trend that has been observed for just shy of five-and-a-half years. The sharpest rate of wage inflation was recorded in the South of England. Temporary wages also rose further at the UK level in September, albeit at a weaker pace than in the previous month.

Related Dovetail articles
Who wants to have their cake and eat it?
Key stats on the work life balance