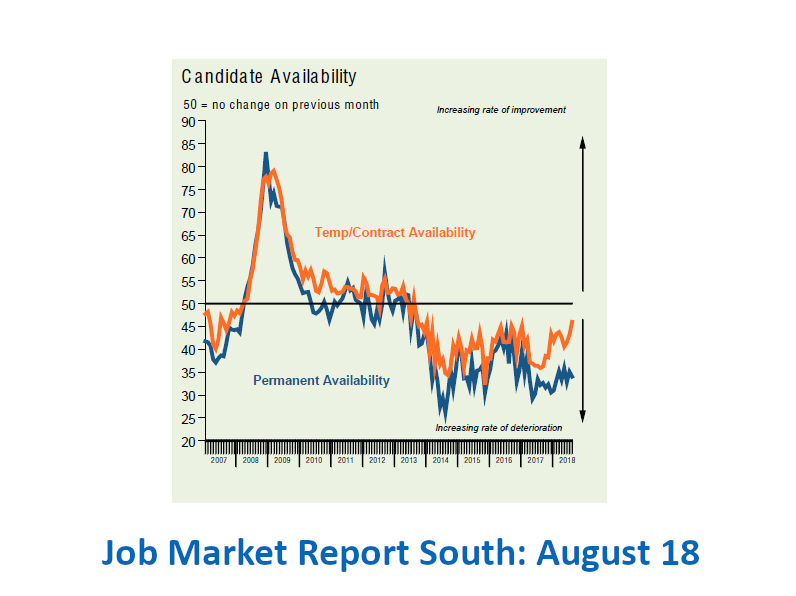 See our latest round up of IHS Markit & REC’s Job Market Report in the South for August – who gather data from Recruitment agencies in Dorset.

Find out what Salaries in Bournemouth and the South are doing; and where the key skills shortages are.

‘Softer increases in both permanent placements and temp billings in August’

“Businesses are getting on with it driving Britain’s growth – jobs are being created and starting salaries are rising. There are big opportunities out there for candidates right now looking for a new role.

“But how long our labour market can defy gravity if the shape of our future trading arrangements with the EU remain unclear is the big question. Companies are starting to implement contingency plans now – and those who aren’t will need to step up progress.

“The biggest long-term question on jobs is how they will be affected by new technology and stiff price competition driven by value-conscious consumers. For recruiters, helping people find pathways from sectors like retail into growing sectors will both boost opportunity and address candidate shortages in key sectors.”

Permanent staff appointments rise at softer pace
Recruitment consultancies based in the South of England indicated a further rise in permanent placements during August, thereby extending the current sequence of expansion to 25 months. Although the rate of growth eased since July, it was sharp overall and broadly in line with the series average.

Steeper reduction in permanent candidate supply
Permanent candidate availability in the South of England fell further in August. Notably, the rate of contraction quickened since July and was sharper than the series long-run average.
As has been the case in each of the past three months, the South of England registered the quickest decline in permanent labour supply of all four monitored English regions.

Permanent salaries
After slipping to a 19-month low in July, the rate of starting salary inflation in the South of England accelerated in August. Moreover, the latest increase in starting pay for permanent workers was the quickest recorded since September 2017 and the strongest of all four monitored English regions. According to panellists, low candidate availability had underpinned greater salaries.

Staff appointments
Permanent staff appointments across the UK rose at the quickest rate for five months in August. Strong increases in
permanent placements were seen across all four English regions, with the steepest expansion registered in London.

Candidate availability
Permanent staff supply across the UK fell in August, and at a similarly sharp rate to that seen in July. Steep falls were seen across all four monitored English regions, with the South of England once again registering the quickest rate of decline.

Pay Pressures
August survey data signalled a sharp increase in permanent starting salaries across the UK, with the rate of inflation the second-strongest in over three years. Pay rose at quicker rates in three of the four English regions covered by the survey, with only the North of England noting a softer rate of growth.

Related Dovetail articles:
Do we need to know what salary you are on?
Are you offering the right salaries for the best talent?
Get your skates on