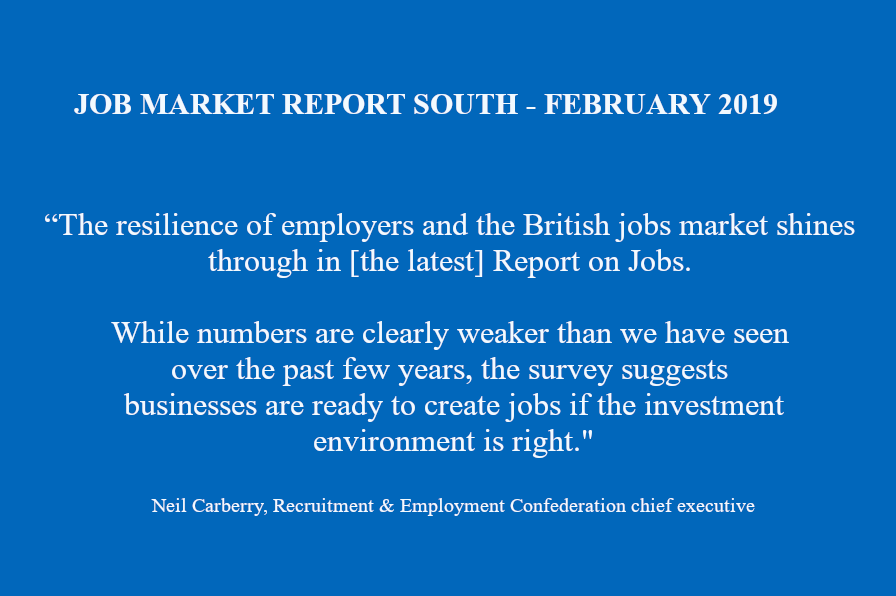 The KPMG and REC, UK Report on Jobs: South of England is compiled by IHS Markit from responses to questionnaires sent to around 150 recruitment and employment consultancies in the South of England.
We’ve selected key points to reflect the Job Market in Bournemouth.

“Recruitment is perhaps one of the clearest areas where the effects of Brexit can already be seen in the South. There has been a notable growth slowdown in permanent placements already this year, with recruiters reporting that Brexit uncertainty was stopping people from searching for new jobs”.

“The situation is being managed in part by an increase in temporary placements as businesses look to cover gaps with contract staff. However, there are anecdotal reports of temporary workers, particularly those from the EU, leaving the UK ahead of Brexit”.

“Businesses in the South will be keen more than ever to have clarity over what comes next. Particularly those that may be planning for a potentially busy tourist season as more and more people chose to holiday at home, in part again due to Brexit uncertainty.”

“The resilience of employers and the British jobs market shines through in today’s Report on Jobs. While numbers are clearly weaker than we have seen over the past few years, the survey suggests businesses are ready to create jobs if the investment environment is right.”

“Recruiters are playing a crucial role in helping their clients fill gaps. As we draw closer to Brexit day, uncertainty and concern has grown, putting the sustainability of positive jobs news at risk. Firms are looking for politicians to find a solution to the current deadlock that gives them the certainty they need to invest and create jobs.”

February survey data indicated that permanent staff placements in the South of England rose only modestly. In fact, the latest increase was the least marked since August 2016, continuing a notable growth slowdown seen during the first quarter so far. Respondents found that candidate shortages and Brexit-related uncertainty curbed the upturn.

After a slight upturn in short-term staff billings in the South of England in January, there was a solid increase in February. Recruiters generally associated the rise with an improvement in the number of available contract roles. Nevertheless, the rate of expansion remained weaker than across the UK as a whole.

Demand for both permanent and temporary workers in the South of England increased further in February. Permanent job vacancies rose sharply overall. However, the rate of growth softened to a 28-month low.

Notably, the upturn was stronger than the average for the UK. Temporary job vacancies in the South of England also rose at a weakened pace, albeit one that was broadly in line with the national trend

Candidate availability for permanent job roles in the South of England continued to decline sharply in February. Nevertheless, the rate of deterioration was the softest since January 2017, as some respondents saw candidate numbers increase in sectors such as automotive and construction. Mainly though, recruiters found that an uncertain outlook prevented people from searching for new jobs.

Recruiters in the South of England recorded a weaker fall in candidates for temporary/contract jobs during February. The rate of decrease was the slowest in six months and remained less marked than the national trend. Anecdotal evidence suggested that temp workers, particularly from the EU, are leaving the UK. Brexit uncertainty also remained a factor leading to fewer job seeker numbers.

Average salaries awarded to newly-placed permanent workers in the South of England grew sharply in February, in line with the current trend. The pace of increase was also faster than the UK average. Panellists that noted a rise associated this with a shortage of candidates as well as increased demand from employers.

Temporary staff wages in the South of England rose at a diminished rate in February, with inflation moderating to a 27-month low. This was in line with a softening rate of growth across the UK as a whole. Nonetheless, the survey still pointed to a sharp increase in pay rates, which respondents related to challenges in attracting new candidates.

Permanent staff placements across the UK stabilised in February, following the first contraction for two-and-a-half years in January. Broken down by region, higher permanent appointments in London and the South of England helped to offset falls in the Midlands and the North of England. UK temporary billings rose markedly midway through the first quarter, with the rate of increase picking up from January. Renewed increases in temp billings were seen in London and the North of England, while growth picked up in the South of England. The Midlands registered a softer, but still sharp, rate of expansion.

Latest survey data pointed to another fall in permanent staff supply across the UK. However, February’s decline was the softest for just under a year, with slower reductions recorded in each of the four covered English regions. The rate of deterioration was quickest in London, and weakest in the Midlands. Temporary worker availability in the UK also decreased during February. The rate of reduction eased since the start of 2019, but remained stronger than the historical average. London was the only covered English region to record a faster deterioration in short-term staff supply in February.

Permanent starting salaries in the UK continued to increase sharply during February. That said, the rate of growth was the softest recorded since July 2018, with slower rises in three of the four monitored English regions. The North of England was the only location to see the rate of inflation quicken from January. In line with the trend for permanent pay, wages earned by temporary staff also grew markedly in February. This was despite the rate of increase easing to the slowest for just over a year. Faster rises in the Midlands and North of England contrasted with softer growth in London and the South of England.

Source:
Thanks as always to IHS Markit for the report and data provided