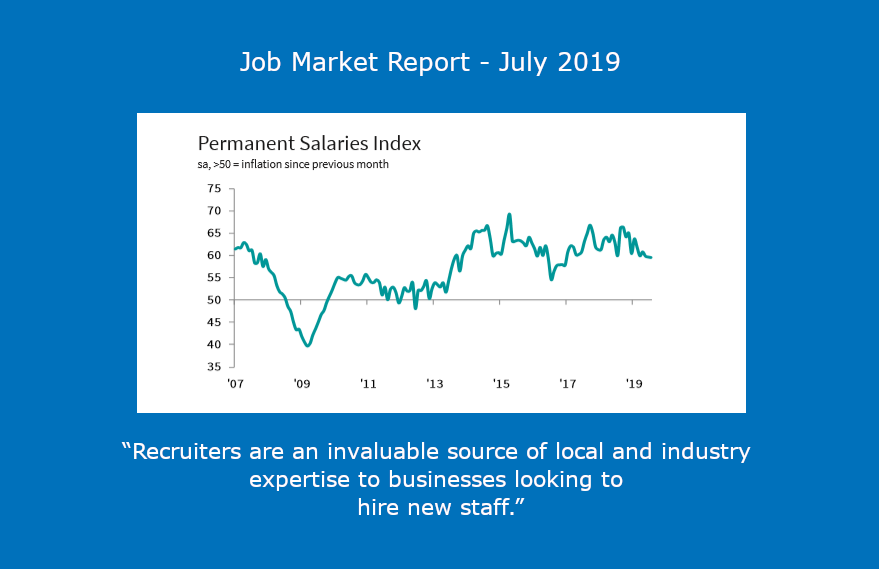 Every month, Dovetail Recruitment summarise the key points from the KPMG and REC UK Report on Jobs: South of England. Here are the latest figures for July– showing salary comparisons for Bournemouth,
plus stats on candidate placements and skill shortages. It’s an HR must read.

“Political uncertainty is still biting in the South. Businesses continue to put off long-term decisions and relied heavily on temporary staff in July. When compared with the rest of the country, temporary staff appointments in the South rose at the highest rate last month. This is despite the fact that both temporary and permanent availability declined at quicker rates compared with other regions – with workers nervous about switching roles thanks to the uncertainty.
“In terms of skill shortages in the South – to name just a few – accounting and finance, construction, and hospitality are being particularly hard hit for both temporary and permanent vacancies.
“Greater competition for workers means we’ve seen yet another increase in permanent and temporary wages, but average weekly earnings in the South still lag behind most regions at £571 a week.”

“Our flexible jobs market remains a key strength for the UK as we navigate an uncertain time. While we are seeing a concerning weaker trend in permanent placements bed in, the rate of change is slow, employment rates are high and starting salaries are growing.
“The new government should be focused on delivering the negotiated exit from the EU businesses need, but also on avoiding damaging changes that will undermine the strength of our jobs market. An improved approach to immigration, reforms to the apprenticeship levy and avoiding hasty changes to contractor tax rules should be top of the list.
“Recruiters are an invaluable source of local and industry expertise to businesses looking to hire new staff. The REC is helping its members to do this with new, local workforce intelligence data.”

July survey data indicated that permanent placements in the South of England fell for the fifth month running. That said, the rate of decline eased to a modest pace that was the softest since April. The latest reduction was generally linked by recruiters to candidate shortages and delayed decision-making among clients due to greater market uncertainty. Permanent staff appointments also fell further at the national level, albeit marginally.

Recruitment consultancies based in the South of England reported a further rise in billings received from the employment of temporary staff in July. According to anecdotal evidence, greater usage of short-term staff underpinned the latest rise in temp billings. Though solid, the rate of increase edged down to a four-month low. At the UK level, temp billings expanded at a marginal pace that was the slowest for 75 months.

Latest data signalled further increases in demand for both permanent and temporary staff in the South of England. Permanent vacancies rose sharply overall, with the rate of growth quickening to a four-month record. Notably, the upturn outpaced that seen at the national level (54.7). Demand for temporary staff meanwhile grew at a modest pace, despite the rate of increase quickening since June. The expansion also remained slower than the UK-wide trend (53.3).

The availability of candidates to fulfil permanent job roles in the South of England fell further in July. Though still sharp, the rate of deterioration was the softest seen in two-and-a-half years. Panel members linked the latest reduction in permanent staff supply to a reluctance among candidates to change roles due to uncertain market conditions, as well as a generally low unemployment rate. At the UK level, permanent candidate availability also fell at a weaker, but still marked, pace.

Adjusted for seasonal variation, the Temporary Staff Availability Index pointed to a further sharp fall in the supply of temporary workers in the South of England. This was despite the rate of reduction easing to the least marked in four months. Recruiters often cited a high employment rate across the region when explaining the fall in availability. Temp staff supply across the UK as a whole declined at only a modest rate that was the softest recorded for just over six years.

Skills in short supply: Temporary staff
Recruitment consultancies are invited to specify any areas in which they have encountered skill shortages during the latest month.

Recruitment consultancies in the South of England registered a further rise in starting salaries for newly-placed permanent workers. Reports from panellists indicated that skill shortages had pushed up pay in the latest survey period. Though sharp and above the historical average, the rate of inflation edged down to its softest for just over two-and-a-half years. Starting salary growth softened to a 27-month low at the national level,
but remained robust.

Average hourly pay rates for short-term staff in the South of England continued to rise in July, thereby stretching the current sequence of growth to 88 months. Where higher temp pay was reported, this was generally attributed to increased competition for workers. The pace of inflation was sharp overall, having picked up slightly since June. However, the rate of growth lagged the national trend for the second month in a row.

Permanent staff appointments across the UK fell for the fifth month in a row during July. However, the pace of decline slowed for the second month running and was only marginal overall. The latest result was driven by reductions in three of the four monitored English regions, with only the North of England recording an increase. The fastest deterioration was seen in London. Meanwhile, temporary staff billings across the UK continued to rise at the start of the third quarter, extending the current run of growth that began in May 2013. However, the rate of expansion eased to the softest over this period and was only slight overall. At the regional level, both the Midlands and the North of England registered moderate declines, whereas there were further increases in London and the South of England.

As has been the case in each month since May 2013, the supply of permanent workers across the UK fell in July. That said, the rate of contraction was the slowest for two-and-a-half years. All four monitored English regions recorded declines in permanent candidate availability, but only the Midlands reported a faster reduction than in June. Similar to the trend for permanent staff availability, temporary labour supply across the UK declined during July. The result stretched the current run of reduction to just over six years, but the rate of decrease eased to the softest in that period. At the regional level, there were falls in three of the four monitored English regions, with the only exception being a marginal increase in the North of England.

Starting salaries for permanent workers across the UK continued to rise at the start of the third quarter. The rate of inflation remained historically marked, despite easing to a 27-month low. All four covered English regions registered higher starting salaries, with the fastest rise recorded in the North of England. Temporary pay across the UK also rose in July.  The pace of growth eased to the slowest in four months but remained sharp overall. At the regional level, faster rates of pay inflation in the North and South of England contrasted with slower rises in the Midlands and London.

Sources:
Thanks to KPMG/IHS Markit for providing the information above.