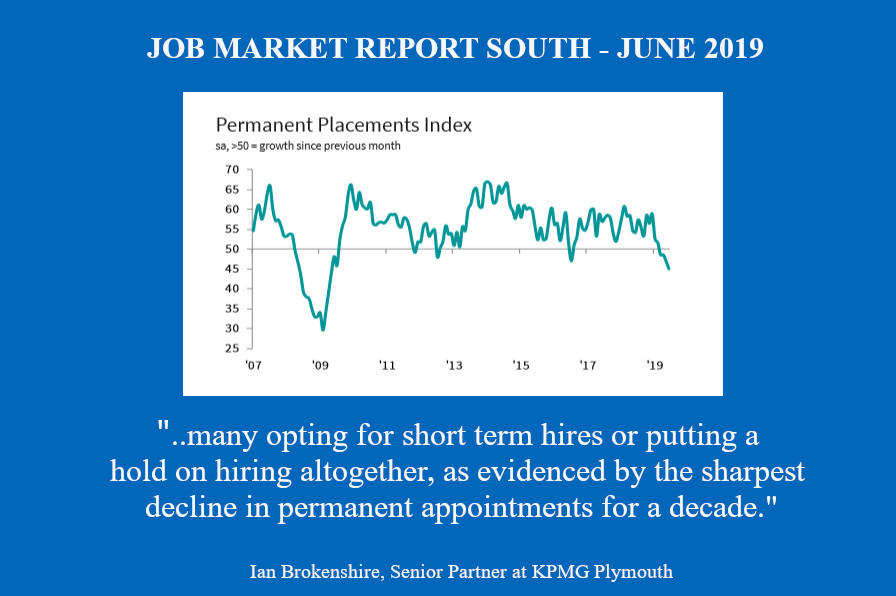 The KPMG and REC, UK Report on Jobs: South of England is compiled by IHS Markit from responses to questionnaires sent to around 150 recruitment and employment consultancies in the South of England. Here is our summary of the key stats for the Recruitment Market Report for last month.

Commenting on the latest survey results, Ian Brokenshire, Senior Partner at KPMG Plymouth, said:
“The continuing political uncertainty is delaying business decisions, with many opting for short term hires or putting a hold on hiring altogether, as evidenced by the sharpest decline in permanent appointments for a decade. “Greater competition for the few roles available isn’t good news for job-seekers, however those who have been successful in securing a role have commanded higher pay.”

Neil Carberry, Recruitment & Employment Confederation chief executive, said:
“The jobs market has slowed a little, but one issue which shows no sign of relenting is the shortage of qualified candidates in some areas. “Agencies employing temporary workers do all they can to train them to fill these vacancies, but this is made more difficult by the constraints of the apprenticeship levy. It is high time that this policy was reformed.”

Quickest drop in permanent placements since May 2009

Recruitment consultancies in the South of England signalled a steep and accelerated fall in the number of people placed into permanent jobs in June. Notably, the latest reduction was the fastest in just over 10 years and extended the current sequence of decline to four months. According to panellists, greater political and economic uncertainty had dampened hiring activity. At the UK level, permanent placements fell for the fifth time in six months, albeit modestly.

Latest data signalled a further rise in billings received from the employment of temporary workers in the South of England during June. Where an increase in temp billings was noted, this was often linked to firm demand for short-term workers. Though strong, the rate of expansion was the softest seen in the current three-month sequence of growth. Temp billings also expanded at the UK level, though the rate of growth remained marginal.

Demand for permanent workers in the South of England continued to rise in June. That said, the pace of expansion was the slowest recorded since January 2012 and weaker than the UK-wide trend. Temporary vacancy growth in the South of England also slowed during June. Notably, the latest increase was the least marked since July 2012 and only modest. Across the UK as a whole, demand for short-term staff grew at a softer, but nevertheless solid, pace.

The seasonally adjusted Permanent Staff Availability Index remained well below the neutral 50.0 level to signal a further decline in permanent staff supply across the South of England. Notably, the rate of contraction quickened slightly to a three-month record that was also steeper than the UK average. Recruiters that reported lower permanent candidate numbers generally linked this to skill shortages and a greater reluctance to switch roles amid an uncertain outlook.

As has been the case since September 2013, the availability of temporary workers in the South of England fell during June. The rate of contraction accelerated slightly to a sharp pace that was broadly in line with that seen across the UK as a whole. Reduced candidate supply was often blamed by panellists on generally tight labour market conditions and fewer EU nationals.

June survey data signalled a further rise in salaries awarded to newly placed permanent staff in the South of England. Reports from panellists indicated that employers were having to increase pay offers due to candidate shortages and greater competition for staff. Though sharper than the national average, the rate of inflation was the softest seen for two-and-a-half years.

Pay awarded to temporary staff in the South of England increased at a softer pace in June. Though marked overall, the latest increase was the slowest since February and also weaker than that seen for the UK as a whole. Higher temp pay was often attributed to lower candidate supply.

Recruitment consultancies across the UK recorded a fourth consecutive monthly reduction in permanent staff placements during June. The rate of decline was modest and only slightly softer than the one in May, but nonetheless marked the joint longest fall in staff appointments in roughly a decade. Three of the four monitored English regions saw an overall drop in permanent hires, with the North of England the only area recording an increase. At the same time, billings received from the employment of temporary staff across the UK saw a marginal uptick. Despite rising from May, the rate of growth was the second-weakest in the current 74-month sequence of expansion. Higher temp billings in London and the South of England contrasted with slight declines in the Midlands and North of England.

Permanent labour supply deteriorated sharply in June, extending the current period of reduction to 74 months. Notably, the rate of decline remained much quicker than the historical average. All surveyed English regions registered an overall drop in candidate availability, with the South of England seeing the steepest fall while the Midlands recorded the softest. Temporary staff availability across the UK dropped at a slightly less marked pace in June. Nevertheless, the overall decline in short-term candidates remained sharp. The North of England registered only a marginal fall, the softest recorded in the near six-year sequence of deterioration, whereas London saw the quickest rate of contraction.

Starting salaries for permanent workers across the UK continued to rise in June, extending the current sequence of growth to just over seven years. The pace of increase was sharp and broadly in line with that seen throughout the past three months. The Midlands recorded the quickest rise in permanent starting salaries, while London continued to register the slowest increase. Meanwhile, remuneration for temporary staff across the UK rose sharply and at a similar pace to that seen in May. At the regional level, faster wage growth was recorded in the Midlands and North of England, while London and the South of England saw weaker increases in pay.

Thanks as always to IHS Markit and KPMG for this data.
Check back next month for the next recruitment market report.

Recent Dovetail articles:
How to give Constructive Criticism
The Question of Gender at Work
Career Skills: Gravitas