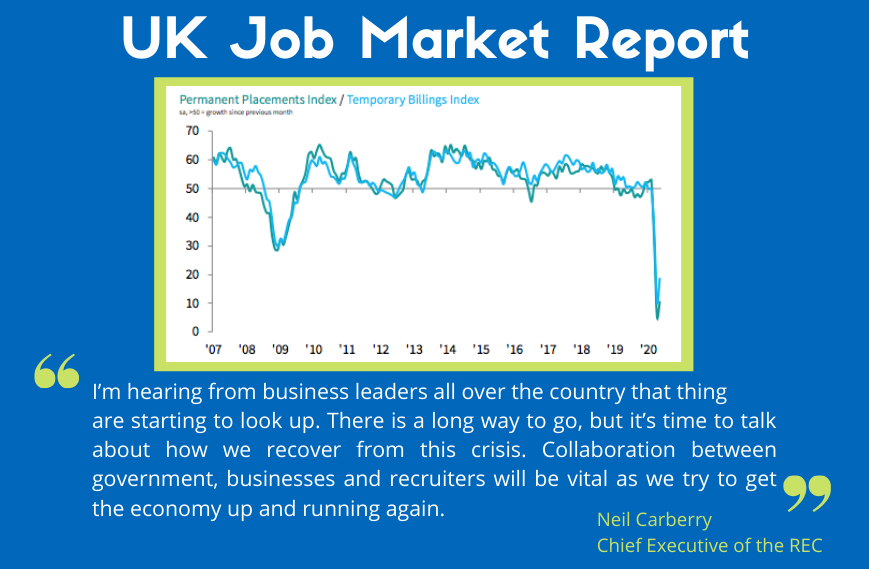 UK Job Market Report’s main findings: Permanent placements and temp billings decline further amid recruitment freezes, availability of workers rises at quickest rate since July 2009, & weak demand for staff leads to downward pressure on pay.
Every month we receive the latest figures on the employment market in the South and the UK. The UK Job Market report is kindly provided by IHS Markit, KPMG & REC who gather the key statistics from recruitment consultancies in the area.

It’s important at this point to remember that these figures were  taken in the second to last week of May and in the two weeks since the data was collected, lockdown has eased and feedback since shows the slight improvements are continuing.

“The number of people looking for work has risen at the quickest rate since July 2009 making it a highly competitive market. With a potential July stimulus package from the Government set to include a focus on retraining and skills, adaptability will be the key to success for jobseekers in 2020.”

“I am hearing from business leaders all over the country that things are starting to look up. There is a long way to go, but it’s time to talk about how we recover from this crisis. Collaboration between government, businesses and recruiters will be vital as we try to get the economy up and running again. The UK’s staffing and recruitment companies are experts at helping people find work, and we are ready to support jobseekers in the months ahead.”

The collected data showed hiring activity continues to remain weak across the UK. that hiring activity remained weak across the UK, as permanent placements and temp billings both fell at the second-sharpest rates on record. Recruiters frequently mentioned that the coronavirus disease 2019 (COVID-19) pandemics mean that clients delayed or cancelled hiring plans until the outbreak was under control and business operations returned to a more normal state. Permanent placements fell sharply across all four monitored English regions in May, led by the North of England.

Temporary billings also felt the impact of the COVID-19 pandemic as they were at the second fastest decline on record, only being surpassed by April. This decline was mainly due to company closures due to the virus, or a reduction in need to temporary staff as many permanent members were put onto the furlough scheme. Temp billings fell at softer, but nonetheless severe, rates across each of the four monitored English regions. The quickest fall was seen in the South of England.

Demand for staff contracts further in May

Overall vacancies declined again in May. However, this was an improvement from April’s record low. This was evident across both permanent and temporary vacancies, although permanent declined at a quicker rate. The decline was also seen in both public and private sectors, with the private sector showing the steepest drop. As expected this decline was seen across all sectors except for nursing and medical care which actually increased in number of vacancies.

It’s good news for hiring managers here, as the availability of candidates continues to increase. Furthermore, the rate of expansion was the fastest since July 2009 and among the quickest in the survey’s 22-and-a-half year history. The increase in supply was driven by faster rises in both permanent and temporary staff, with the latter registering the sharper rate of growth. Several sources also mentioned that staff placed on furlough were seeking new roles due to fears of being made redundant in the coming months. Something we ourselves have heard first hand.

Starting salaries for those placed in permanent positions feel again in May. This was linked to budget cuts and greater market uncertainty. A lot of candidates are also more flexible with salaries when they’ve been made redundant. The rate of reduction quickened to the second-steepest on record, exceeded only by that seen in February 2009. Regional data signalled a broad-based decline in starting salaries, which was led by London.

For temporary candidates, hourly rates of pay continued to decline. The pace of reduction was the most marked since May 2009. A number of panel members noted that clients renegotiated temp pay rates as demand conditions weakened and budgets were placed under greater strain due to COVID-19. Notable drops in wages were seen across all four monitored English regions, with the steepest fall seen in London.

Employee earnings (including bonuses) rose by 2.4% year-on-year over the first quarter of 2020, according to the latest data published by the Office for National Statistics. This was slower than the 2.8% expansion seen in the three months to February 2020, and the slowest rate of growth since the three months to June 2018. The softer increase in earnings was driven by weaker private sector pay growth, which eased to a near three-year low of 2.2%. In contrast, public sector earnings growth held steady at 3.3%.

Dovetail’s Good News
Fixed Term Contracts: What you need to know
How to be a Good Leader