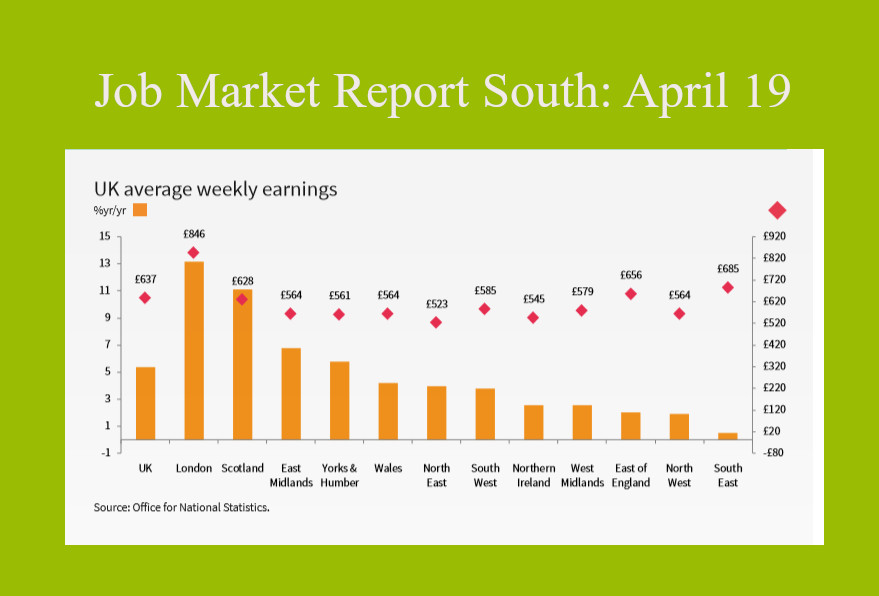 Every month, Dovetail Recruitment summarise the key points from the KPMG and REC UK Report on Jobs: South of England. Here are the latest figures for April – including the UK’s average weekly salaries, candidate placements and skill shortages. It’s a must HR read.

“The uncertainty around Brexit continues to dominate the job market in the South, with April seeing a further drop in the demand for permanent staff. Things look brighter when it comes to temporary placements though, with last month seeing a significant rise in this area. Pay for temporary workers is also high in a bid to attract applicants from a small pool.”

“With there being a good chance of Brexit uncertainty continuing for several months, a wise move could be for businesses to get one step ahead of their competitors who have put everything on hold, by continuing as normal and snapping up those skilled candidates that are looking for a change over the summer!”

“Employers are turning to temporary work to support their business and offer people opportunity while the long-term economic picture is unclear. “We should be proud of how our jobs market has adapted to challenging circumstances. Resolving Brexit will bring some certainty, but we must also take bold steps to fix the underlying problems suggested by these figures.”

Recruitment consultants’ in the South of England signalled a second successive monthly decline in the number of people placed into permanent job roles in April. That said, the rate of reduction was unchanged from March and moderate. Panellists that reported lower permanent staff appointments commonly linked this to delayed hiring decisions and increased uncertainty due to Brexit. Permanent placements also fell at the national level in April, albeit at a marginal rate.

April survey data pointed to a marked increase in billings received from the employment of temporary/contract workers in the South of England. This contrasted with a modest reduction at the end of the first quarter. The rate of expansion was the quickest seen in the year to date and stronger than the UK-wide average. According to recruiters, increased activity at clients contributed to the rise in temp billings.

Though solid and above the national average, growth of demand for permanent workers in the South of England softened further in April. Notably, the latest increase in vacancies was the least marked since August 2012. April survey data also pointed to a softer increase in demand for temporary staff across the South of England. Though strong, the latest increase in short-term vacancies was the slowest recorded for just under six years, and weaker than the UK-wide trend.

The number of people available for permanent roles in the South of England declined further during April. Despite easing slightly from March, the rate of deterioration remained historically sharp and quicker than the national trend. According to anecdotal evidence, reduced candidate supply was due to a generally low unemployment rate and greater reluctance to change job roles amid an uncertain economic outlook.

Stronger reduction in temp worker availability As has been the case in each month since September 2013, the supply of short-term workers in the South of England fell in April. Notably, the rate of reduction was the quickest seen for three months and remained much faster than the long-run series trend. Recruiters that registered a deterioration pointed to a high employment rate, greater market uncertainty and fewer EU candidates.

As well as reporting on the UK’s average weekly salaries, Recruitment consultancies are invited to specify any areas in which they have encountered skill shortages during the latest month.

Recruitment consultancies based in the South of England signalled a further sharp increase in salaries given to permanent starters in April. Notably, the rate of inflation picked up from March’s recent low and was stronger than that seen across the UK as a whole. Skill shortages and greater competition for scarce candidates were cited as key drivers of salary growth.

Recruitment consultancies based in the South of England signalled a further sharp increase in salaries given to permanent starters in April. Notably, the rate of inflation picked up from March’s recent low and was stronger than that seen across the UK as a whole. Skill shortages and greater competition for scarce candidates were cited as key drivers of salary growth

The rate of temp wage inflation in the South of England picked up for the second month running in April. Furthermore, the rate of growth was sharp and quicker than the national average. Reports from panellists indicated that higher hourly pay rates were offered in order to attract applicants amid widespread candidate shortages.

Data from the Office for National Statistics signalled that average weekly earnings across the UK rose by 5.4% year-on-year to £637 in the final quarter of 2018. London saw the strongest annual rise, with pay up 13.1% to £846.
Meanwhile, the weakest increase was in the South East, with average weekly earnings rising by just 0.5% on the previous year to £685.

Permanent staff placements across the UK fell for the second month in a row during April. However, the rate of decline eased from March and was only marginal overall. At the regional level, three of the four monitored English locations recorded lower permanent staff appointments, with the North of England being the only exception.

In contrast, temporary billings in the UK continued to increase at the start of the second quarter. The latest rise extended the current sequence of growth to six years. Moreover, the rate of increase accelerated from March and was solid overall. The Midlands was the only monitored English region to record a decline in temp billings during April.

Although permanent labour supply across the UK continued to fall sharply in April, the rate of reduction was the least marked in just over one year. At the regional level, there were slower declines recorded in each of the four monitored English locations.

The quickest deterioration in availability was registered in the South of England, while the slowest was recorded in the Midlands. Similarly, temporary staff availability at the national level fell for the seventieth month in a row during April. That said, the rate of decrease eased to its slowest since January 2017.

Regional data pointed to softer declines in London and the North of England, and faster falls in the Midlands and the South of England.

Permanent starting salaries continued to increase sharply across the UK in April. That said the rate of inflation edged down to the slowest for two years. The North of England and London registered less robust rises in starting salaries. However, rates of increase picked up in the Midlands and the South of England.

Conversely, hourly pay rates for temporary staff in the UK grew at the fastest pace for three months during April. The North and the South of England recorded quicker rises in temp wages, whereas the Midlands signalled the slowest rate of pay inflation since last October. Notably, London saw wages rise at a solid rate following a fractional decrease in March.

Thanks as always to our sources:
The KPMG and REC, UK Report on Jobs: South of England is compiled by IHS Markit from responses to questionnaires sent to around 150 recruitment and employment consultancies in the South of England. UK’s average weekly salaries.

Related Dovetail articles:
Working from home
Career Tips: How to ask for a pay rise
Thinking of a career change?