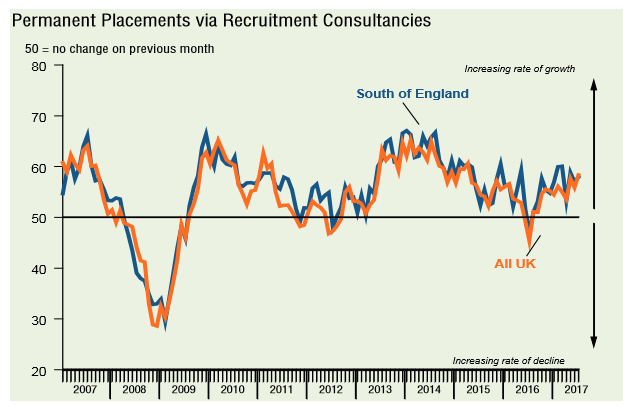 We know how popular the IHS Markit Reports are – see below for their latest findings on the UK Job Market that we’ve summarised for you below.

“The jobs market continues to confound expectations with permanent placements increasing at one of the fastest rates in the past two years. Starting salaries are also still rising, so for workers who want to boost their earnings now is a good time to consider moving job.

“It’s clear that employers are having to work even harder to fill jobs as vacancies rise and candidate availability shrinks. UK employment remains at an all-time high and looks set to keep improving. The parts of the economy most reliant on European workers are under even more pressure as many EU workers return home. Employers are not just struggling to hire the brightest and the best but also people to fill roles such as chefs, drivers and warehouse workers.  “We can’t ignore the importance of our relationship with the EU to employers. If we want to keep our jobs market successful and vibrant, we must make it easier, not harder, for employers to access the people they need.”

Further sharp increase in permanent placements
Recruitment agencies in the South of England reported a further sharp rise in permanent staff placements in July amid reports of robust demand for staff. The rate of growth picked up slightly since June and remained among the highest seen for the past two years. That said, the rate of expansion was slower than that registered at the UK level.

Decline in permanent candidate numbers softens, but remains sharp
The availability of labour for permanent roles in the South of England continued to fall sharply in July. This was despite the rate of reduction easing to the weakest in four months. Notably, the pace of deterioration was the quickest seen of all five monitored UK regions. Business analysts, engineers and care workers were among the staff mentioned in short supply in the latest survey period.

Permanent salaries
Permanent starting salaries awarded to successfully placed candidates continued to rise in the South of England at the start of the third quarter. Furthermore, the rate of pay growth accelerated to a 20-month high, with around one-third of panellists noting higher starting salaries. Increased pay was generally linked by respondents to greater competition for skilled workers and efforts to attract applicants.

Staff appointments
Growth of permanent staff appointments in the UK accelerated to a 27-month high in July, with quicker expansions noted in three out of the five tracked regions. Scotland and London were the exceptions, recording softer increases in permanent placements. The weakest upturn was registered in the capital.

Temp billings across the UK rose during July, as has been observed on a monthly basis since May 2013. The upturn was led by the North of England, while Scotland saw the slowest rate of expansion.

Candidate availability
The downturn in candidate availability for permanent positions remained widespread across the five UK areas. The worst affected region continued to be the South of England. The slowest drop was noted in London. Temp availability also dipped across the board during July. The fastest decrease was again noted in the South of England, where the rate of reduction matched June’s recent record. At the UK level, temp labour supply deteriorated at the fastest pace since December 2015.

Pay Pressures
Permanent starting salaries in the UK increased at the most pronounced pace in 20 months during July, reflecting quicker increases in Scotland, the Midlands and the South of England. The latter saw the strongest rise in permanent pay of the five tracked regions. Meanwhile, salary inflation in the capital eased to a seven-month low.
There were regional divergences with regards to wage inflation. Slower increases in temp pay were registered in the Midlands and the South of England, while rates of inflation picked up elsewhere.