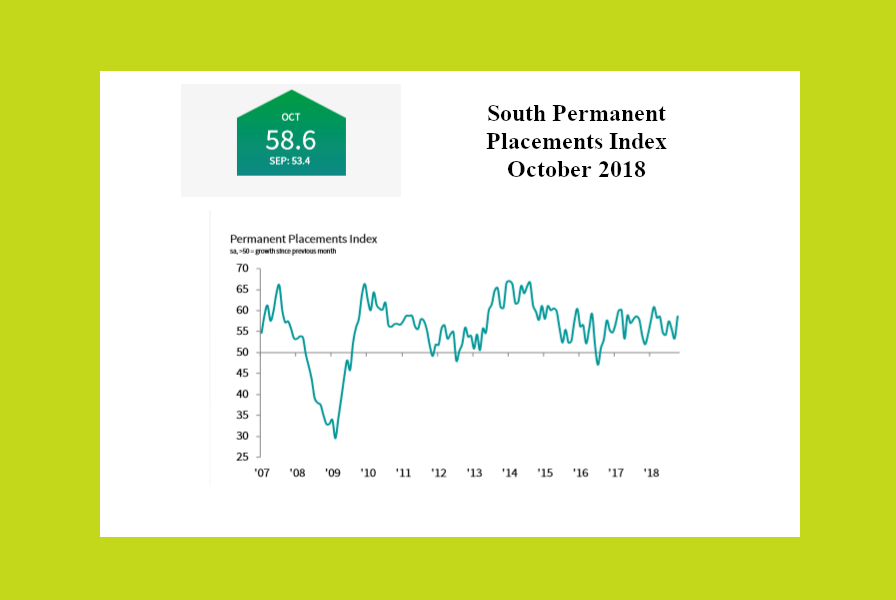 Here is the October summary of  REC’s & KPMG’s Job Market Report for Hampshire, Dorset and the South.  The latest on salaries, placements and job skill shortages in the South.

Permanent placements growth at an eight-month high, but labour supply continues to decline

“The rise of permanent jobs available in the South of England reflects the business strength that we have been seeing throughout clients in the region. There is clearly uncertainty around Brexit but it hasn’t impacted growth yet.

“What is worrying, however, is the fast drop in available staff for these jobs. Although low unemployment as a factor is to be welcomed, the impact of leaving the EU is clearly resulting in there being less foreign workers available already.

“However, there are a couple of good future indications about the region. Firstly, there is less requirement for temporary workers in the South in comparison to the rest of the UK, and secondly, salary growth is also fastest in the South. It seems companies here are confident about the future and want to hire the right people for the long term.”

The number of permanent placements in the South of England grew at a sharp rate in October. Notably, the pace of expansion accelerated to an eight-month high. Recruitment agencies often commented on greater demand for staff in the current survey period.

The fall in permanent staff availability in the South of England was extended to 64 months in October, with the latest deterioration the steepest since January. Recruiters pointed to fewer candidates from abroad and less willingness to move jobs due to Brexit-related uncertainty.

Permanent starting salary inflation in the South of England softened slightly in October, following September’s 12-month high. That said, it remained historically strong overall, with panellists continuing to link this to skill shortages. The rate of inflation was broadly in line with the UK average, after having outperformed the national benchmark in the prior two months.

Permanent staff appointments continued to rise across the UK during October, with the rate of growth faster than that seen in September. The sharper increase was driven by quicker rises in three of the monitored English regions. London was the only locality to post a softer upturn. Similarly, there was an overall increase in temporary staff billings across the UK during October. The marked expansion was the second-fastest seen so far this year as all four regions posted faster rates of growth compared to September.

October data signalled the sharpest fall in permanent candidate availability in the UK since January, extending the current run of decline to 66 months. The steeper contraction in available permanent workers was driven by the South of England, which registered the strongest downturn of all English regions. There was also a fall in the availability of temporary workers across the UK. The overall pace of decline was quicker than in September. At the regional level, faster falls in the Midlands, the North of England and London contrasted with a softer contraction in the South of England.

UK permanent starting salaries rose markedly at the start of the fourth quarter. The pace of inflation was slightly slower than that seen during September, but elevated relative to the historical average. Salary growth was fastest in the South of England and slowest in London. Pay given to temporary workers in the UK also rose in October. Though sharp, the increase in temp pay rates was weaker than that seen in September and the slowest for seven months. London posted the quickest rise, followed by the Midlands, the South of England and the North of England respectively.

Sources:
Thanks as always to IHS Markit