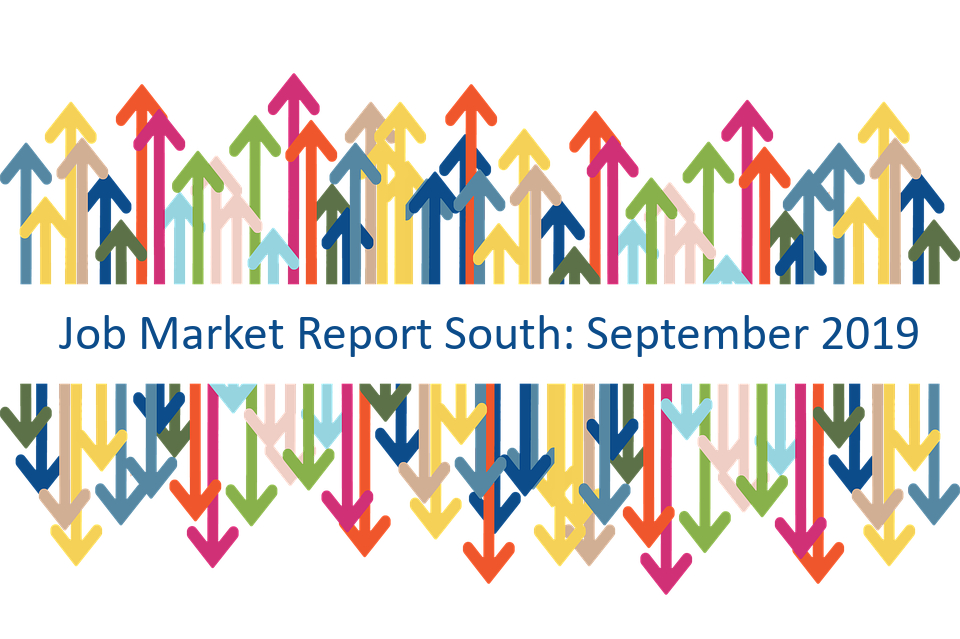 Every month we gather the key figures from IHS Markit, KPMG & REC Job Market Report – the regular update from recruitment consultancies in the area. We pull out the key stats from the Jobs Report South so you know what’s going on in the recruitment market in the local area.

“Businesses in the South of England are facing a real challenge – they are working harder than ever to find the right candidates from a shrinking pool of labour and are trying to convince people to make a career move while there is still so much uncertainty hanging over the economy. To make matters more difficult, company wage bills are taking an increasingly larger bite at company finances as market forces tilt in favour of job hunters. That said, the same fears over a lack of visibility are also starting to put a gentle brake on hiring decisions too. While many still appreciate the need to press on with growth plans and can’t afford to stand still, some business leaders are hitting pause – at least in the short term. I think everyone will agree that we’re all looking for a breakthrough in the Brexit wrangling in the coming weeks to free up the labour market.”

“Businesses are positive about their own prospects, but ongoing Brexit uncertainty has led many firms to delay projects and hiring decisions. Vacancy growth has fallen to its lowest since 2012. The UK’s vibrant temporary work market is playing an important role in helping employers to manage the ongoing uncertainty and job-seekers to find work. “There are deeper issues which must be addressed to secure the UK’s future prosperity. Productivity is falling, and there are skills shortages in vital sectors across the economy. Solving these problems must be top of the government’s to-do list once the Brexit deadlock has been broken.”

Permanent placements decline only slightly
Recruitment consultancies based in the South of England signalled that permanent staff appointments decreased again in September. That said, the reduction was only slight and the weakest seen in the current seven-month sequence of decline. It was also slower than the UK-wide trend. Reports from panellists indicated that demand for staff had softened due to ongoing market uncertainty related to Brexit.

Temp billings growth remains weak
Billings received from the employment of short-term staff in the South of England continued to rise at the end of the third quarter. Recruiters that noted higher temp billings linked this to a general increase in demand for short-term staff. That said, the rate of expansion held close to August’s recent low and was marginal. Across the UK as a whole, temp billings expanded modestly, with growth also subdued by historical standards.

Vacancies for both permanent and temporary workers in the South of England rose at subdued rates in September. Growth of demand for permanent staff in the region was the least marked since January 2012. The latest upturn was moderate, albeit in line with the UK average. Although temporary vacancies expanded at a quicker pace than in August, the rate of increase was only modest and slower than the UK-wide trend.

Recruitment consultants are asked to report whether the availability of permanent and temporary staff has changed on the previous month.

Softer, but still sharp, reduction in permanent labour supply
The availability of permanent workers in the South of England continued to contract markedly in September. This was despite the rate of reduction easing to the weakest for three years. Recruiters widely reported that Brexit-related uncertainty was the main factor weighing on permanent candidate numbers. The supply of permanent staff also fell sharply across the UK as a whole, albeit at a slightly softer rate than in the South.

Temp candidate availability deteriorates at a sharper pace
September data signalled a steeper reduction in short-term staff supply across the South of England. That said, the rate of deterioration remained weaker than seen on average since the current downward trend began in September 2013. The availability of temporary workers at the UK level also fell further at the end of the third quarter. Despite quickening since August, the rate of reduction was not a steep as seen in the South of England. 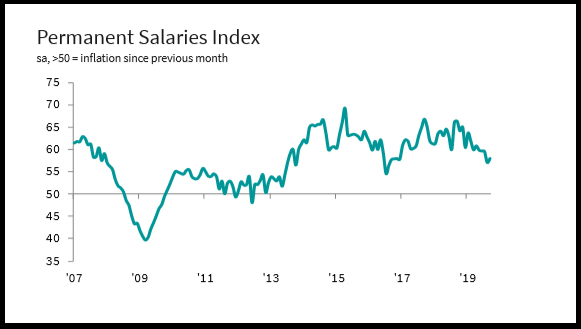 PAY PRESSURES
The recruitment industry survey tracks both the average salaries awarded to people placed in permanent jobs each month, as well as average hourly rates of pay for temp/contract staff.

Starting salaries continue to rise sharply
Salaries awarded to newly-placed permanent staff in the South of England rose further in September. The rate of inflation was sharp, and picked up slightly from August’s recent low. Panel members that registered higher starting salaries attributed this to efforts to attract candidates. Starting pay for permanent staff also increased at a sharper rate at the national level. Notably, the upturn across the UK as a whole was steeper than that recorded in the South of England.

Slowest increase in temp wages since November 2016
Adjusted for seasonal factors, the Temporary Wages Index signalled a sustained rise in temp pay in the South of England during September. Though solid, the rate of growth eased to the least marked since November 2016. A softer increase in average hourly rates of pay was also seen across the UK as a whole, though the rate of inflation continued to outpace that seen across the South of England.

Staff appointments
Permanent placements continued to fall across the UK in September, stretching the current sequence of contraction to seven months. That said, the rate of decline eased slightly from August and was modest. Driving the latest reduction were falls in three out of the four monitored English regions, the sharpest of which was seen in the Midlands. The North was the only region to report a rise, albeit fractional. Meanwhile, temporary staff billings across the UK rose, with growth accelerating to the quickest rate since April. The increase was modest overall and slower than the long-run series average. At the regional level, solid growth in the North and the Midlands drove the increase. Recruiters in the South reported only a fractional rise, whilst temp billings fell modestly in London.

Candidate availability
The supply of permanent candidates fell in September, extending the current sequence of contraction which began in May 2013. The rate of decline eased to the softest in 33 months, although it remained marked nonetheless. All of the four surveyed English regions reported a fall in the supply of permanent candidates, with the steepest reduction seen in London and the softest in the North. Similar to the trend for permanent availability, the supply of temporary staff continued to decline in September, with the reduction gathering pace from August. The fall was strong and the fastest in three months. The South registered a steep decline and the sharpest across the four monitored English regions, followed by the Midlands and London. Meanwhile, the North saw only a marginal fall.

Pay Pressures
Starting salaries for permanent workers across the UK continued to increase in September, with the rate of salary inflation quickening from August. The increase was sharp overall, and broad-based across the four monitored English regions. All four saw a broadly similar rate of salary inflation. Meanwhile, temporary pay across the UK also continued to rise, with the latest data signalling a solid rise in temporary wages. That said, the increase was the slowest seen since November 2016 and below the series average. Inflationary pressures were weakest in London, whilst the Midlands reported the fastest rate of growth in temporary worker remuneration.

Source: Thanks to KPMG, REC + IHS Markit for the data.