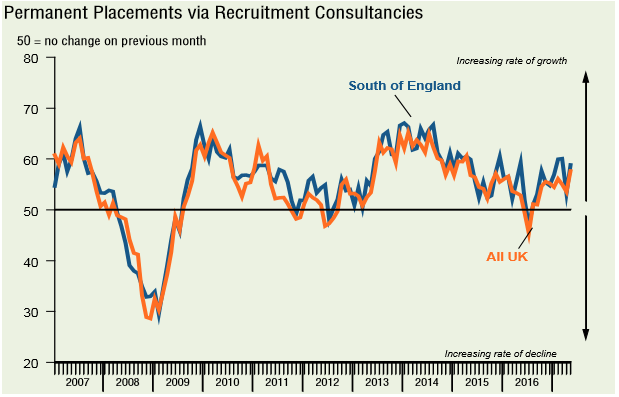 The latest report is here! We know how popular these summaries are, so see below for the latest findings from IHS Markit on the UK job market in May.

“The challenges facing the next government are stark. Demand for staff is the strongest in almost two years, but the number of people available to take those jobs has plummeted. Official data shows unemployment has dropped to the lowest level since 1975, and EU citizens are leaving the UK in droves. Employers seeking to fill vacancies are running out of options.

“Skill shortages are causing headaches in many sectors. The NHS, for example, is becoming increasingly reliant on short-term cover to fill gaps in hospital rotas because there aren’t enough nurses to take permanent roles. Meanwhile, the shortage of people with cyber security skills is a particular concern in many businesses in the wake of the recent high-profile WannaCry attacks.

“Whichever party forms the next government must focus on improving the employability of our young people and boosting inclusion for under represented groups. Alongside this, these figures clearly show that in many sectors we need more, not fewer people so that businesses can grow and public services continue to deliver.”

May sees a mixed bag – The number of permanent placements is up, yet we’ve seen a fall in the numbers of permanent candidates available – will the trend continue?

Sharpest fall in permanent candidates for 33 months
May survey data pointed to a steep and accelerated decline in permanent candidate numbers in the South of England. Furthermore, the rate of deterioration was the sharpest since August 2014 and among the fastest in the survey’s near-20 year history. The latest decline was also the steepest seen across all monitored UK regions, with over half (53%) of respondents noting a deterioration in candidate numbers. 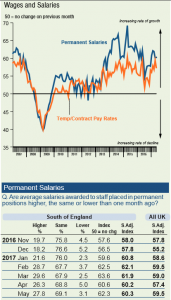 Permanent salaries
Average starting salaries for staff in the South of England continued to increase in May. The rate of inflation was little-changed from the previous month and sharp overall. Moreover, the pace of increase was the second-fastest of the five UK regions, fractionally behind the North of England. Recruitment agencies that noted higher starting salaries generally attributed this to a lack of suitable candidates.

Check back for June’s report – to see how things are moving in the South of England.

Thanks as always to IHS Markit for providing these reports.