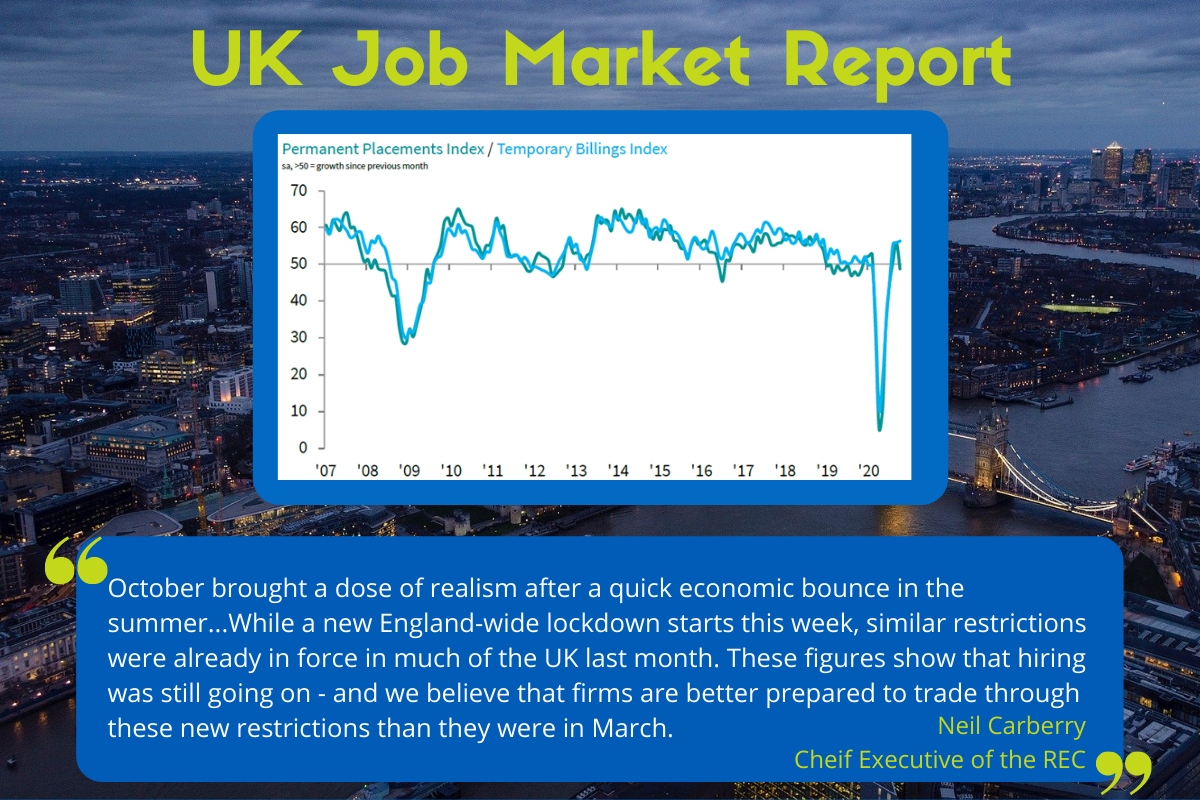 The October Job Market Report finds that permanent placements have returned to declining numbers, but temporary billings continue their strong path of growth.

“With a reluctance to recruit permanent staff and a big increase in people available for work, the impending lockdown puts the UK jobs market in a precarious position. While the furlough scheme extension may give a brief respite, it will fuel economic uncertainty and further dampen prospects for jobseekers, hitting hiring activity hard.
“The Government needs to ensure it offers enough financial support to UK business and opportunities for jobseekers to upskill as we continue to navigate through this crisis.”

“October brought a dose of realism after a quick economic bounce in the summer. While a new England-wide lockdown starts this week, similar restrictions were already in force in much of the UK last month. These figures show that hiring was still going on – and we believe that firms are better prepared to trade through these new restrictions than they were in March. Nevertheless, the outlook remains uncertain, and concerning. We face a challenging winter and temporary work will be a vital tool for keeping businesses going and people in work.

All businesses are looking to Government to use the lockdown wisely and provide the Test and Trace system, vaccine and economic support that firms will need if they are to drive our recovery in 2021.”

*Please note, both comments were obtained prior to the announcement from the Chancellor that the furlough scheme will continue into March 2021.

Permanent placements return to a declining rate after the increase last month.

Once again, recruitment agencies reported the latest figures reflected the impact of the COVID-19 pandemic. Permanent placements declined after the increase we saw last month. This was in stark contrast to the findings on temporary billings which reportedly increased. Firms were often preferring to recruit short term staff due to the rising cases and market uncertainty surround the coronavirus.

Despite continued growth for temporary billings, the decline in permanent vacancies off-set this, and the overall demand for staff weakened.

There was a renewed drop in overall vacancies across the UK even as temporary billings increased. Again the cause of this was said to be the impact of the coronavirus resulting in a drop in permanent vacancies.

As in previous months, candidate availability continues to rise due to mass redundancies, and concerns over stability within current companies. The rate has eased to a five month low, but still continues to rise at a sharp rate.

Due to the continued rise in availability of candidates and reduced budgets, starting salaries and packages fell again this month. This was seen in both new permanent and temporary positions. This is good news for clients as they are able to hire great talent at a competitive salary, but there is some concern that candidates will quickly move on when salaries start to rise.

Permanent placements fall back into decline

There was a renewed drop in the number of placements made in October as reported by UK recruitment agencies. The reduction ended the two month long rise. The main reason sited by sources was the growing uncertainty surrounding the rise of COVID-19 cases. With the new national lockdown in place from 5th November to 2nd December with a possibility of an extension, we would expect to see these numbers continue to fall next month. This uncertainly causes clients to cancel or delay hiring plans, with some preferring to take on temporary or contractor workers. The Midlands and North of England did see continued growth, but London and the South off-set this.

This was the third consecutive month that temporary billings rose and the rate in which it grew picked up again since September and was the quickest since December 2018. Recruiters often linked this to the gradual return to more normal market conditions, and the resumption of projects that had previously been delayed. However, concerns over a new lockdown may have possibly prevented further growth in these numbers. This growth was recording across the South, North, and Midlands, but not London.

October saw vacancy numbers return to a decline. The rate was only modest due to a rise in temporary billings. The decline in permanent vacancies was the seventh fall in eight months. Private sector vacancies continued to rise slightly, but demand for permanent and temporary workers declined in the public sector.

Data from the ONS reports that overall job vacancies remailed well below their pre-pandemic levels. Vacancies were -40.5% lower than a year ago.

Overall candidate availability continues to rise at a strong pace.

As we have seen since the end of March, overall candidate availability has again increased. The rate of growth remained strong and among the quickest seen since the global financial crisis, but it has eased since August’s record high. The rate of expansion continues, but has eased to a five-month low. Redundancies, or fear of redundancies has driven this latest increase. This was seen across all four areas of Engand.

For a seventh successive month, consultancies signalled another month of decline in permanent salaries and temporary hourly rates. The rate of reduction in permanent salaries was the fastest since July. Temporary hourly rates declined and quickened from September, but was not as severe as the declines seen in the height of the pandemic. London reported the sharpest decline out of all four regions.

Sources: Thanks as always to IHS Markit, KPMG and REC for the data provided for our October Job Market Report.