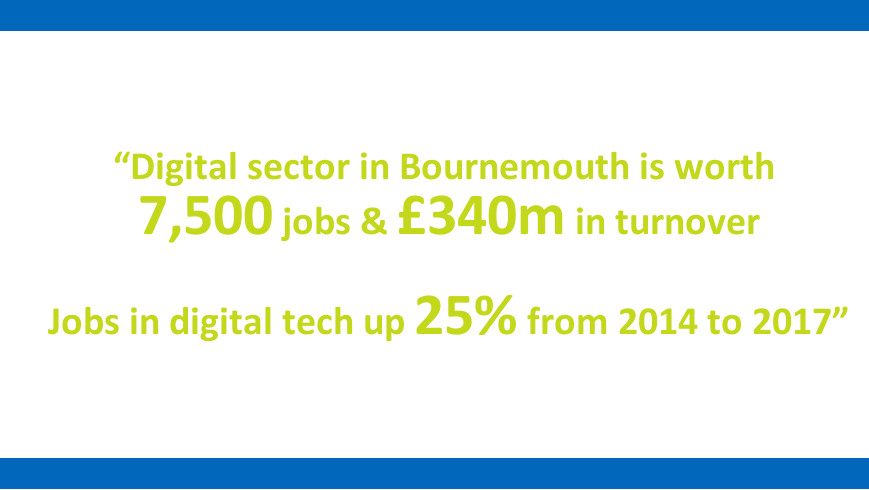 We’ve been eagerly waiting for the release of this year’s Tech Nation Report, the most comprehensive guide to the UK’s digital tech ecosystem to date, and we’re pleased to say it’s finally here!

We’ve gathered all you need to know from the report if you’re looking for digital jobs in Bournemouth, we’ve summarised the key findings for you below for the UK & Bournemouth.

1. Jobs in digital tech are on the rise

Between 2014 and 2017 employment in the digital tech sector increased by 13.2%. Workers in digital tech are also more productive than those in non-digital sectors, by an average of £10,000 per person per annum.

Jobs requiring digital tech skills command higher salaries, on average, £42,578 compared to £32,477 per year for non-digital jobs, while digitally enabled jobs — those requiring only some engagement with digital tech – bring in £35,227. Overall, digital tech jobs are good for workers, and good for the UK

However, tech does not currently offer equal opportunities for all. There is a growing movement to promote diversity, with a number of initiatives aiming to address the gulf between men and women’s employment in the sector. Other inequalities also deserve attention.

Digitally-enabled jobs require interaction with tech. These are arguably the most interesting range of roles, and they are likely to boom as tech becomes more important in traditional sectors.

According to the Department for Digital, Culture, Media & Sport (DCMS) definition of technology literacy, 32%  of UK jobs are classed as digitally-enabled, 13% are digital tech jobs, and 55% are non-digital tech roles.

3. Digital tech jobs are those that require expertise such as software developers or engineers.

In fact, there is a productivity power path from London to the mouth of the River Severn, running along the M4 corridor and spreading to Southampton and Portsmouth. Digital tech turnover by employee ranges from £27,650 in Campbeltown to £320,000 in Bristol. The UK’s strength as a tech nation rests on acknowledging, and valuing this diversity of economic activity.

The findings show that digital tech skills are pervasive. As its influence reaches every part of the economy, even non-digital tech companies are becoming increasingly reliant on tech.

See their full report on Jobs and Skills >

4. Productivity in digital tech for the top 15 UK Travel to Work Areas

We’ve gathered just the key elements from the report we thought you’d find useful, but make sure you view the complete Tech Nation Report 2018.