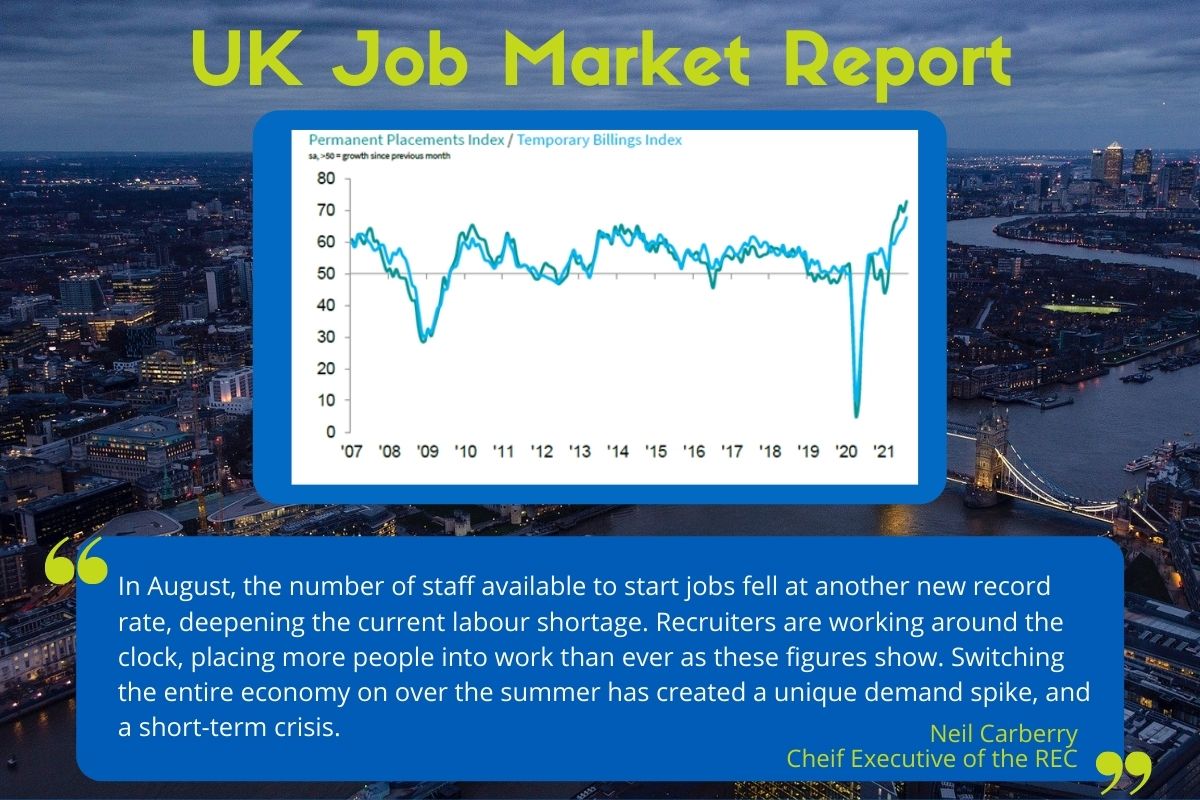 The latest Job Market Report for August 2021 has been released and the key findings have been that vacancy and permanent placement growth are at record highs, while there continues to be an unprecedented drop in candidate supply, therefore driving a continued increase in salaries.

“Candidate shortages continue to plague businesses, who are all recruiting from the same pool of talent and struggling to fill gaps. While record high permanent placements and higher starting salaries mean it remains a job seekers market, recruiters and employers have seen the most severe decline of candidate availability in the survey’s history and will be thinking about how to attract and retain new staff. This crisis isn’t going away, and the winding down of the furlough scheme at the end of September – while potentially bringing more job hunters to the market – could also add fuel to the labour shortage fire. Many businesses will have changed their business model during the pandemic, and so significant numbers of staff returning from furlough may need reskilling to re-join the workforce in the same or another sector. Right now, businesses can lead the way by working with government and civic leaders to rapidly address the reskilling and upskilling that is so urgently needed.”

“In August, the number of staff available to start jobs fell at another new record rate, deepening the current labour shortage. Recruiters are working around the clock, placing more people into work than ever as these figures show. Switching the entire economy on over the summer has created a unique demand spike, and a short-term crisis. But it would be a mistake for businesses to think of this as only a short-term issue. A number of factors mean that the UK labour market will remain tight for several years to come. Business leaders should be looking now at how they will build their future workforces, in partnership with recruiters, including the skills and career path development. But attracting and retaining staff also requires a serious assessment of why workers want to work with the firm – from management approaches to facilities, as well as pay. Government can help too, by aligning skills offers with business needs and making sure the new immigration system works. But government also must prioritise alleviating the immediate crisis – we’d like to see a joint forum where government departments and business can collaborate to tackle worker and skills shortages.”

While permanent placement growth slowed in July, August has seen a new record increase in permanent placements, with many citing increased economic activity, improved market confidence, looser COVID-19 restrictions and further demand for staff. This upturn has now extended the current period of expansion to six months. This was true across all four regions of England.

In August, there was yet another severe reduction in labour supply across the UK, with the South experiencing the most severe drop. This decline in candidate availability is now at the 6 month mark, and August has seen the sharpest drop since records began in 1997. Almost 63% of recruiterse noted lower permanent staff supply. This latest drop has been attributed to the continued reluctance of employees to consider looking for a new role due to lingering pandemic-related uncertainty, a decline in candidate from the EU, furlough, and generally tight labour conditions. The South outpaced the national average with the quickest fall, and the North recorded the steepest fall.

Growth of demand for staff holds close to record high

There was a further rapid increase in overall vacancies in August, with this increase being the second quickest on record, only surpassed by last month’s record high. Demand for permanent and temporary staff remains high, despite the growth softening slightly for both types of role. The rate of growth for temporary workers is down to a three month low, but is still climbing at a historically sharp pace. This was seen across both public and private sectors, with private sectors feeling the increases the most. The ONS has reported that the number of vacancies was standing at 953,000 and was more than tw0-and-a-half times the amount seen this time last year. This was the highest figure ever recorded.

Vacancy growth was felt across all categories with the strongest seen in IT/Computing for permanent vacancies and Hotel & Catering for temporary.

Salaries for newly-placed permanent staff increased once again during August. This rate was the fastest since records began 24 years ago and exceeded the record high seen in July. This was common across all four English reasons with the South seeing a slightly softer increase than the rest of England. The increase was due to tight labour market conditions, and increased competition to secure skilled candidates. This rise was seen across both permanent and temporary staff.

Sources: Thanks as always to IHS Markit, KPMG and REC for the data provided for our UK Job Market Report for August.

Follow us to keep up to date with The UK Job Market Report May, Recruitment + HR news,  as well as our latest jobs, career tips + everything else related to your working world.