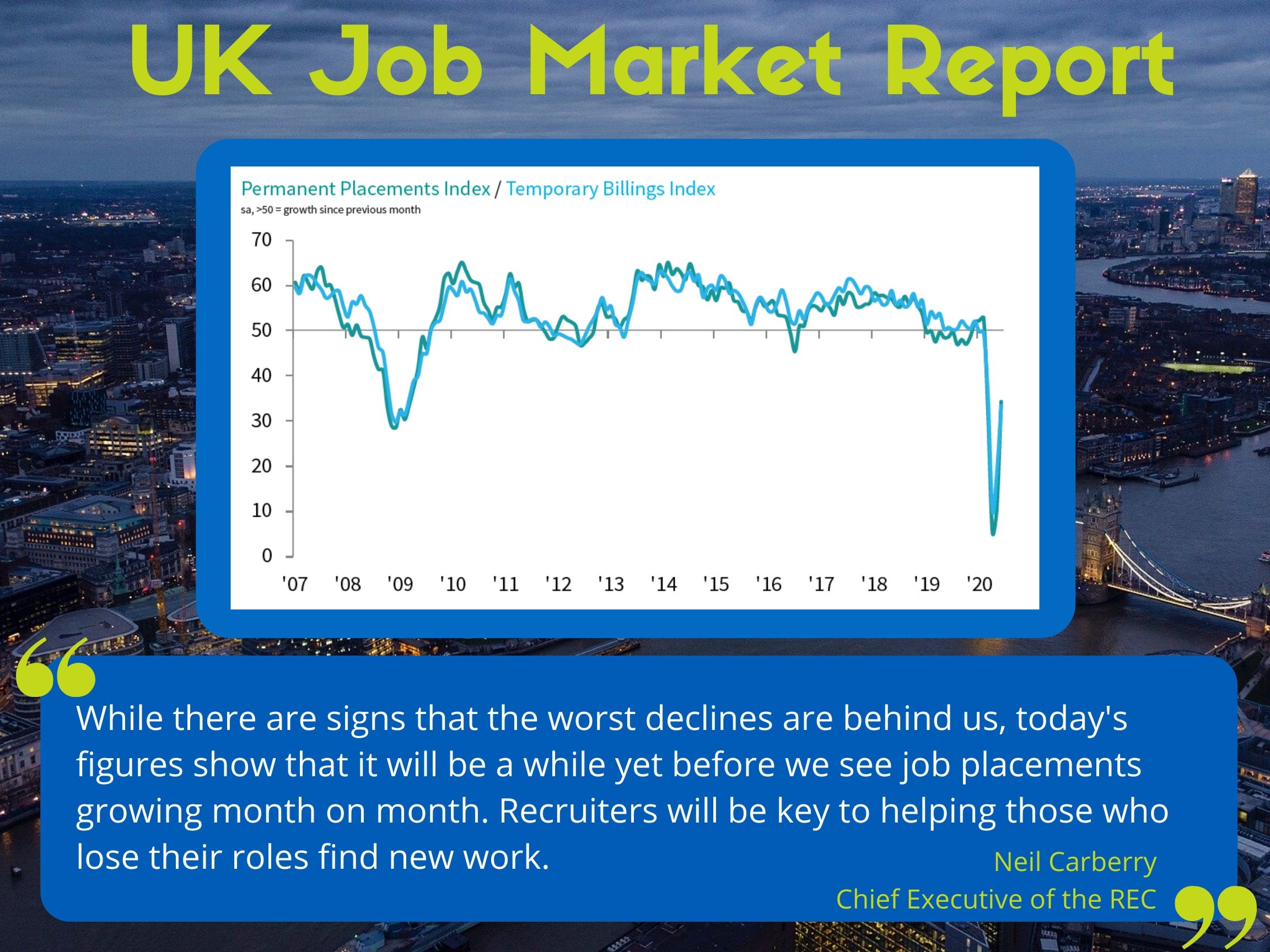 Softer falls in permanent placements and temporary billings, quickest rise in staff supply since the start of 2009, & starting pay continues to fall as vacancies decline further.

Every month we receive the latest figures on the employment market in the South and the UK. The UK Job Market June is kindly provided by IHS Markit, KPMG & REC who gather the key statistics from around 400 UK recruitment and employment consultancies.

“Despite an inevitable further drop in hiring activity for permanent and temporary staff, it is encouraging to see they both fell at softer rates than seen in April and May.”

“While there are signs that the worst declines are behind us, today’s figures show that it will be a while yet before we see job placements growing month on month. That’s no surprise, as businesses are focussing on bringing furloughed staff back to work…Recruiters will be key to helping those who lose their roles find new work – there are always vacancies out there for jobseekers, though they are at a lower level than normal right now.”

Permanent placements still declined sharply for the fourth successive month, but the rate of decline eased significantly. The decline was of course linked to the ongoing coronavirus pandemic resulting in recruitment freezes or cancelling recruitment all together. The softer rate of decline was linked to the easing of lockdown, but many also stated that placements had only risen modestly. It will be interesting to see how July fares with further easing of social distancing measures, the opening of hospitality and furloughed workers able to return on a part furlough basis.

Temp billings fall further, but downturn eases since May

Last month we saw the second fastest decline in temporary placements. This month, we continue to see a decline in temp billings, but the rate of contraction eased further from April’s record. It was noted that higher temp billings generally linked to the slow reopening of the economy. Again, it will be very interesting to see the statistics for July with the opening of the hospitality sector again.

Overall vacancies fall at a softer rate in June

There was a softer but still marked, reduction in total vacancies in June. Vacancies have increased since April’s record low but still remained well below normal levels for this time of year. This drop was seen in both permanent and temporary vacancies and across both the public and private sectors and the steepest drop was of course seen in the Hotel, Catering and Retail industries.

Good news again for hiring managers who are currently looking for staff. There was a further increase in the availability of candidates in June. The rate of growth was the sharpest since January 2009. This was linked to the increased redundancies and subsequent deterioration in the economic conditions. Those on furlough are also seeking new positions due to concerns over the stability of their role. These findings were evident across both permanent and temporary staff. Higher availability will lead to higher application levels and hiring managers may find themselves unable to balance work with recruiting. Recruitment agency partnerships will be key in ensuring applications are thoroughly gone through, replied to and shortlisted effectively.

There was a third successive monthly decline in starting salaries for permanent staff members in June. The rate of reduction has eased since May, but is still prominent. This decline was due to a higher competition and availability of potential candidates, those who have been made redundant considering accepting lower salaries to secure a role, and cuts to client’s budgets. There was also a noticeable further reduction in the rates of pay for temporary staff. Again, the rate of decline softened, but still remained sharp.

As a special feature, the REC conducted their JobsOutlook survey asking employers on their opinion of the current market. In the first half of June, they found business confidence in the UK was still strongly negative, but had made a notable improvement.

“Looking at the most recent UK Report on Jobs, the data also suggests that the worst of the COVID-19 induced downturn may certainly be behind us. A number of the survey’s indicators, including permanent staff appointments, temp billings and overall vacancies, rose to the greatest extent ever seen on a monthly basis in June, and posted well above the all-time lows recorded in April.”

This was a sure sign that conditions across the labour market are steadily moving towards stabilisation. While many businesses will start taking staff off furlough, or even part furlough, the improvements in this month’s report are encouraging and positive.

Sources: Thanks as always to IHS Markit, KPMG and REC for the data provided for our UK Job Market June Report.