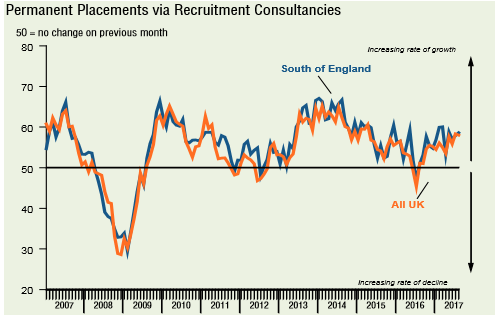 We know how popular the IHS Markit Reports are, once again we’ve summarised the figures for you from the UK’s ‘Job Market report south’ – August. The Report on Jobs: South is a monthly publication produced by IHS Markit and sponsored by the Recruitment and Employment Confederation.

“As this month’s report clearly shows, employers are increasingly turning to recruitment agencies as it becomes harder to find the people to fill the jobs available. There are two trends at play. Businesses are seeking more professional and managerial capability, so we’re seeing high demand for roles like financial directors, analysts, and compliance and HR professionals. Meanwhile, there is a significant shortage of people to fill blue collar roles such as drivers, electricians, and construction workers, and this is being exacerbated by a fall in net migration from the EU.

“In many areas of the jobs market candidate supply cannot meet demand. Employers are having to offer more money to secure the people with the skills they need. While the working population, in general, has experienced a pay squeeze, there are clearly opportunities now to earn more by moving jobs.

“This is good news for individuals, but businesses will be concerned about the sustainability of this trend. Businesses can only grow if they have access to the people and skills they need. It is essential that the government recognises this by developing an evidence-based immigration system that will support the economy.” 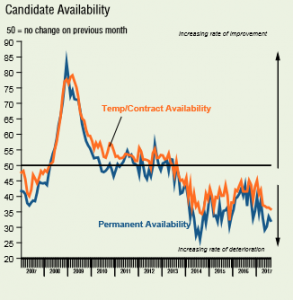 The number of people placed into permanent roles in the South of England increased for the thirteenth successive month in August. According to panellists, strong demand for workers contributed to the latest upturn in staff appointments. Furthermore, the rate of expansion accelerated to a three month high and was slightly stronger than seen at the UK level.

Recruitment consultancies in the South of England signalled a further deterioration in the availability of permanent staff in August. Furthermore, the rate of contraction was sharper than seen in the previous month, and the steepest of all UK regions monitored by the survey. CAD designers, engineers, nurses and paraplanners were among the skills mentioned as being in short supply in the latest survey period. 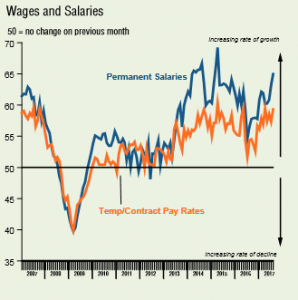 Average starting salaries for people placed into permanent roles in the South of England increased again during August. Moreover, the rate of salary inflation quickened to a 28-month peak, and continued to outpace those seen for all of the four remaining UK regions monitored by the survey. Candidate shortages were cited by panellists as a key factor driving up pay in August.

Data from the Office for National Statistics indicated that average weekly earnings across the UK increased +2.0% year-on-year to £606 in the second quarter of 2017. The South West recorded the strongest annual rate of growth, with earnings up +8.7% to £602.

Permanent placement growth in the UK softened in August due to weaker rises in London, the North of England and the Midlands. Stronger rates of expansion were recorded in both Scotland and the South of England. The best-performing region on this front was, nevertheless, the Midlands.

The North of England bucked the regional trend of accelerated rates of contraction in permanent candidate numbers, and was the only locality to note a weaker reduction. The most pronounced drop in staff availability was recorded in the South of England. Quicker contractions in temp availability were registered in each of the five monitored UK regions. As a result, temp staff supply at the national level dipped at the fastest pace in 20 months.

The rate of permanent starters salary inflation in the UK climbed to a 22-month high during August. This reflected stronger increases in London (two-month high) and the South of England (28-month peak), while softer rates of inflation were noted elsewhere.